Chapter 10B: Caught in the Middle or
11A: The Hero of the Western Isles

Daman Mills
[view]
“Knights of Bern! We strike now! Leave none alive! Don't even leave them time to scream in fear!”
—Galle

Galle is an enemy character from Fire Emblem: The Binding Blade. He is the lover of Melady and the mentor of her younger brother, Zeiss.

Galle was born in Etruria, but he later joined the army in Bern and rose in rank as one of its most skilled generals. Due to his skill, he was supposed to become the third Wyvern General of Bern. However, Narcian put forth the complaint that Galle was not even a native of Bern and effectively blocked Galle’s promotion and swiped the position for himself by spreading accusations about him. He is not bitter about this and continues to serve Zephiel faithfully. Before Narcian is dishonorably demoted and killed, Galle serves as Murdock's lieutenant, and becomes the third Wyvern General afterwards. In Chapter 21, he appears with a squad of Wyvern Riders to aid Murdock in fighting against Roy's army, but ultimately dies in battle.

Azure Rider
Considered by many to be the strongest Wyvern Lord of Bern's army, he is loyal to the leader of the Wyvern Generals, Murdock. Appears in Fire Emblem: The Binding Blade.

Note: (Move the appropriate character to a space adjacent to Galle and choose the option to Talk.)

Galle is illustrated in the trading card game Fire Emblem Cipher with the following cards: 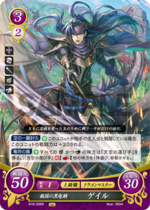 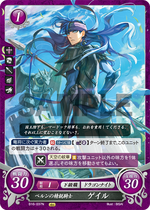 Gale as a man's name is from an English surname, ultimately from Middle English gaile "jovial". It can also be used as a form of the name Galen, a name derived from that of the ancient Greek physician, meaning "tranquil." A gale is also a powerful wind.