Gallus is one of the twelve Deadlords, and appears in Fire Emblem: Genealogy of the Holy War and Fire Emblem Awakening.

In Fire Emblem: Genealogy of the Holy War, little is mentioned about the Deadlords, but they are all fought in the Final Chapter near Belhalla and eventually defeated, including Gallus himself. Gallus is not fought in Fire Emblem: Thracia 776.

Gallus can be very dangerous, as the tome he wields has the nasty ability to reduce a selected target's HP to 1. However, the odds of this taking place are relatively low, as the Hel spell is highly inaccurate. Furthermore, as long as there isn't another source of damage nearby, Gallus can't actually kill you, and Julius' Meteors can be neutralized if somebody is placed in front of Belhalla to make him use his Book of Loptyr. It is recommended to use characters such as Shannan with the Balmung or Julia with the Book of Naga to face off against Gallus. One could also berserk him and have him potentially attack Julius and reduce him to 1 HP.

Zehn, Gallus' Japanese name, is the German word for the number 10.

In the English version of Awakening, the Deadlords' names are Latin words for the animals of the Chinese zodiac. The zodiac's tenth sign is the rooster, which in Latin is gallus. 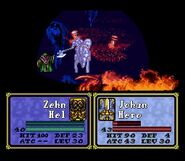