The Game Boy Advance (ゲームボーイアドバンス) is Nintendo's third handheld console. Three Fire Emblem games were released for it, two outside of Japan. It also has two Advance Wars's games which, like Fire Emblem, were made by Intelligent Systems. Fire Emblem: The Blazing Blade (simply titled Fire Emblem outside Japan), the seventh title in the series, became the first game of the franchise to be released internationally in 2003. It is backwards compatible with Game Boy and Game Boy Color games. In 2003, a revision titled the Game Boy Advance SP was released. This model also plays GB and GBC games. In 2005, a backlit model was released. Also, another revision as well as the last model in the model in the Game Boy line called the Game Boy Micro was released. This model only plays GBA games and cannot play GB and GBC games. It was also released nearly an year after the original Nintendo DS. 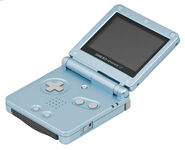