A Game Over (ゲームオーバー) is an event in-game where the player fails to fulfill a certain goal in a chapter or an important character dies, resulting in an instant game-ending screen.

In the context of Fire Emblem, this event always occurs upon the death of any Lord character in the game or an Avatar, as the game's plot revolves around their story, thus the plot cannot continue with their death.

Some maps throughout the series require that the player either prevent an enemy from killing an NPC, escape a map/reach a certain point in the map in a set number of turns, or preventing the enemy from reaching a specific point on the map. Failing to fulfill these requirements will result in an instant Game Over. Other situations that trigger an instant game over include having the enemy subdue the player's base of operations in Fire Emblem: Genealogy of the Holy War, attacking or killing Fargus in Chapter 16x of Fire Emblem: The Blazing Blade, allowing a Begnion Dragoknight to kidnap Leanne and successfully escape with her in tow in Part 2's Prologue of Fire Emblem: Radiant Dawn, or allowing an enemy to pass the green line in Part 3's Chapter 13 in Fire Emblem: Radiant Dawn.

In Fire Emblem: The Sacred Stones, in skirmishes, Tower of Valni, and Lagdou Ruins, if the player didn't bring Eirika or Ephraim into the battle, and all the characters the player did bring die, a Game Over still occurs, despite the fact that Eirika or Ephraim didn't die. This likewise occurs in Fire Emblem Fates under the same circumstances, even assuming that Corrin is absent.

An instant Game Over in TearRing Saga: Utna Heroes Saga, aside from the characters who are required to defeat the final boss's death, will occur if the player hasn't defeated the final boss before Turn 20: Gerxel will cast Black Rain, killing everyone except Tia, who Gerxel intending to gloat at her subsequent despair before absorbing her life energy and regaining the full extent of his heinous powers.

In Fire Emblem Heroes, despite there being no permanent death in the game, there are a lot of ways to get a Game Over that can occur such as, in Grand Hero Battles and Bound Hero Battles, if a unit is defeated, if the turn limit has passed and the player loses all their hearts in Tap Battle. Initially, getting a Game Over forfeited all EXP or SP from the battle, but later versions changed that so that EXP and SP are retained. In modes where they are not disabled, it's possible to use Light's Blessing to recover from a Game Over, with the exception being turn limit Game Over.

In Fire Emblem Warriors, all chapters are time-limited. Usually the time limit is 1 hour, but sometimes (usually in History Mode battles, but also in main story Chapter 7) it is shortened. If the time runs out, the Game Over will occur.

In Fire Emblem: Three Houses, if a map's defeat condition is triggered, the Divine Pulse mechanic immediately activates so long as there is at least one charge remaining and the player can immediately rewind time to the appropriate action they wish to restart from without having to completely restart from the beginning.

If a Game Over occurs, players must restart that chapter or restart from the last save point.

Shadow Dragon and Blade of Light/Mystery of the Emblem Edit

The player will be shown a scene of a castle looming over a vast graveyard that Alm saw earlier in the game. The words "The End" will be shown along with a quote by an unknown conqueror or a famous general:

"Some Lessons can only be learned through defeat."

Genealogy of the Holy War/Thracia 776 Edit

New Mystery of the Emblem Edit

The screen will show a book from the end of the game with red words "Game Over" at the very front. This will be caused if Chrom or Robin falls in battle.

Chrom: No! Not you, Robin! Open your eyes! OPEN YOUR EYES!

The screen will fade as howling wind is heard. Eventually, the scene opens up to a desolate grey wasteland with weapons littered all over. In one pile lay the silhouettes of the Sword of the Creator, Failnaught, Areadbhar, and Aymr. On the right side of the screen, the words "Game Over" appear.

The screen fades into a brown background where the words "Game Over" appear in red, capital letters. Three red feathers can be seen floating from the top of the screen to the bottom. The music will also fade out into silence. 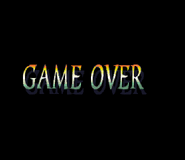 A Game Over screen in Fire Emblem: Genealogy of the Holy War.

A Game Over screen in Fire Emblem Fates.
Add a photo to this gallery

Retrieved from "https://fireemblem.fandom.com/wiki/Game_Over?oldid=516249"
Community content is available under CC-BY-SA unless otherwise noted.