The Ganglari (ガングレリ Gangureri) is a Sword that is introduced in Fire Emblem Fates. An evil, twisted blade that is encased in a miasmic cloud of fell energy, the Ganglari, though in possession of high Might, saps a substantial amount of its wielder's HP post-battle.

After King Garon determines that Corrin is worthy to leave the Northern Fortress and aid the Nohrian effort in the impending war between Hoshido and Nohr, he bequeaths the Ganglari to them. Corrin first uses the sword to fight Hoshidan prisoners, but decides not to kill them against Garon's orders. Angered by Corrin's insolence, Garon orders them on a reconnaissance mission to a fort located on the border separating Nohr and Hoshido. After Corrin is forced to battle the Hoshidan army situated there as a result of Hans' deliberate provocation, Hans ambushes Corrin and Gunter, causing the latter to fall into the Bottomless Canyon. Enraged, Corrin unintentionally triggers their Dragon Fang skill, but is flung into the Bottomless Canyon by the Ganglari before they can exact their vengeance. Thanks to Lilith's timely intervention, Corrin is rescued.

Shortly after Corrin reunites with their Hoshidan family after being carried into the country's territory without their knowledge, their biological mother Queen Mikoto decides to announce the return of her child in the town square of Shirasagi Castle. During the announcement, a hooded figure summons the Ganglari from Corrin and promptly uses it to unleash a magical explosion. The explosion claims the lives of many Hoshidan civilians, and Mikoto herself is slain after using her body as a shield to protect them from harm.

The Ganglari never resurfaces thereafter, unless the Revelation campaign is chosen. The blade is one of the weapons employed by Sumeragi in Chapter 25 of this campaign.

The Ganglari is Corrin's personal sword up until Chapter 5, whereupon it is replaced by the Yato for the rest of the game, regardless of the path chosen. It bears no special properties, apart from the fact that it is a moderately powerful sword.

Another version of the Ganglari can be obtained once the player has accrued 400 battle points. While any sword user can use it, requiring the unpromoted sword user Weapon Rank B, it is significantly stronger than the original Ganglari. This Ganglari has the second highest base damage of all swords in-game, with a might of 16 and high accuracy. However, its drawbacks include the inability to be forged as there is only one copy per playthrough and the fact that the wielder will always lose 20% of their hitpoints after using it.

Ganglari (or Gangleri) literally means "Wanderer", and is one of the many nicknames borne by Odin. The name can thus be thought of to be an appropriately-selected one, as it could, in the context of Fates, be a reference to the mysterious hooded man responsible for activating the blade's devastating ability to self-destruct.

Sumeragi, using Ganglari to kill Mikoto and destroy the barrier. 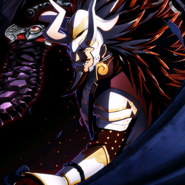