Chapter 5: The Exalt and the King

[view]
“Men are beasts! Nothing more! We fight! We kill! We devour our prey! Beasts do not stand behind beasts, little prince... They use each other so long as it suits their own selfish purpose!”
—Gangrel talking to Chrom before they wage battle in Chapter 11

Gangrel is an enemy character from Fire Emblem Awakening, later made playable via SpotPass.

Originally a thief born in one of the poorest parts of Plegia, Gangrel was mistreated growing up, witnessing the robbery and death of his mother, formerly a member of nobility, from an illness. Gangrel eventually rose to be the ruler of Plegia, and became known as the Mad King. Gangrel allied with the Grimleal and Plegia was turned into a religious dictatorship under the Grimleal.[2] Although most outsiders consider Plegians to be worshipers of Grima, Gangrel states that he is not a follower, and he simply paid "lip service" to them.

Gangrel spends much of the first half of the game trying to start a war between Ferox and Ylisse by sending Plegians disguised as Chrom and the Shepherds, although each attempt failed as the disguised Plegians were killed, coupled with Emmeryn's pacifist nature, did not result in war. However, it made the Feroxi border guards wary of future visits.

Following Flavia's ascension as the ruling Khan of Ferox, she vows to support Ylisse in their time of need. This forced Gangrel to find another way to instigate war, which he did by kidnapping Maribelle, the daughter of Duke Themis. Gangrel accused Maribelle of being a spy who had harmed the Plegians who wished to escort her back home, while Maribelle stated that the Plegians had pillaged a village in her father's domain. Gangrel in turn stated that it was simply a bandit problem in Ylisse, though Emmeryn ultimately believed Maribelle's claims. Gangrel stated that although he could have her executed on a whim, he decided not to, and demanded the Fire Emblem in return for her safety. Emmeryn refused, seeing its value and her pacifist nature. In response, Gangrel ordered several Plegian soldiers to take it by force, and soon declared war after Chrom struck one down as he left.

After the attempted assassination of Emmeryn forces her to leave the capital, Gangrel attacks Ylisstol, causing Emmeryn to return to the capital to protect her people, allowing him to capture her upon her return.

Gangrel planned to execute Emmeryn by pushing her off the horn of a large, dragon-like skull located at Plegia Castle grounds. Chrom's army arrives right before her execution and stops it just in time. As they rush to Emmeryn's execution spot, Chrom sends in Phila to rescue her, but Aversa then summons Risen Archers to foil the rescue attempt. With the situation back under control, Gangrel gives Chrom the option to either relinquish the Fire Emblem or watch Emmeryn be killed by the Risen. Before Chrom is able to make a decision, Emmeryn walks off the horn to her supposed death, to prevent Chrom from giving up the Fire Emblem. Instead of being moved by her words before her suicide, Gangrel sadistically laughs and relishes in Chrom and Lissa's despair and prepares to attack the vulnerable Ylisse, while Basilio and Flavia evacuate Chrom and the rest of his army and retreat back to Ferox.

However, Emmeryn's words were able to sway many of the Plegian soldiers who witnessed the event to wonder if the war was justified. Many of the soldiers begin defecting en masse, and while Gangrel tries his best to stomp them out, he ends up only with a very small but loyal army at the Border Wastes, where he is confronted by Chrom and the Shepherds, falling in battle and presumed dead.

In Paralogue 18, Gangrel is revealed to have survived his last stand. Disgraced and broken, the only work the supposed dead king could get was with Zanth's pirates, working as a servant and was, ironically, being treated like trash as he had treated his soldiers. Zanth's pirate group, who could fight off well-trained armies, caught the attention of Chrom and the Shepherds.

While on duty in a depressed mood, Zanth informs Gangrel that they are to be fighting Chrom and the Shepherds. The name rings a bell in Gangrel's ear, although he states that none of it matters anyways, and heads into battle, knowing that he will die.

During the battle, Chrom spots Gangrel, surprised by his survival, though Gangrel claims that he is dead, and that he is a maggot. Chrom refuses to believe that he is still dead however, and speaks to him a second time, where Gangrel states that his life is over, but his body refuses to die (much like Walhart). Chrom is amused by the turn of events, and although he cannot forgive him for his crimes, urges him to fight by his side, as he declares his life is wasted working with Zanth, Gangrel laughs at the offer and initially declines, wanting him to end his life. Chrom then speaks to Gangrel for a third time, where Gangrel accuses him of being too soft to end his life. Chrom then calls Gangrel pathetic, enraging the former Mad King, claiming that he is not worth killing in this state, and that he should throw his life away fighting Grima to protect his citizens. Although Gangrel states that he clearly despises him, he ultimately chooses to join the Shepherds, allowing Chrom to use his life as he wishes.

If ignored, Gangrel's fate is left ambiguous. He may be killed instead, where he claims that everything is a sick joke in his dying breath.

After the war, if unmarried, Gangrel fell into obscurity. Some said that he found a new kingdom to rule and ruin, while others said that he ended up in the gutters. Regardless, most people agreed that he was dead in a few years.

Initially, Gangrel appears to be a bloodthirsty king searching for violence, as he attempted to provoke Ylisse into war with Plegia because he sought to control the continent, even mocking Emmeryn as too naive and kind. Gangrel reveals he hates the world and even his own subjects due to his harsh past. After his defeat at the Border Wastes, and recruitment into the Shepherds, he seeks forgiveness for his actions. In the DLC Hot-Spring Scramble, he attempts to apologize to Emmeryn for the pain he caused her. Later on, he rants about how he wanted to shape the future, but how the thrill of war "stained" his hands and how he wanted to escape from it. When Emmeryn calls Gangrel a friend, he is shocked by the compliment. Emmeryn's further kindness makes him guilty to the point of tears for everything he did to her.

In his supports with male Robin, Gangrel reveals that he initially intended to unite the continent to fight Valm, but became twisted by the thrill of war and resulted in many people being killed. He regrets starting the war and at the end of their supports, returns to his "energetic" personality due to Robin's words to him, and promised to help Plegian citizens who have lost their way. He also reveals that he does not worship Grima, instead paying lip service to the Grimleal compared to the majority of his people.

In his supports with female Robin, he appears to be more upbeat and lively, and constantly tries to recruit Robin to serve as his personal tactician, trying various methods such as compliments, gifts, and even asking her straight out to work for him. If Gangrel achieves an S Support with Robin, Gangrel confesses that what he really needs is someone to make sure that he does not do anything stupid when he returns to rule Plegia, and asks for her hand in marriage to ensure this.

He is the person in the army most afraid of heights.

As a playable character, Gangrel can be a quite useful unit, as he is one of few units that does not need excessive level grinding to get his strength and magic at a passable level so he can be a solid Trickster. His only major competition as a well-rounded Trickster is from Robin, Anna, and Henry. However, Gangrel receives large bonuses for Hard and Lunatic Mode, putting him at the advantage against the other three, as they need a few Second Seals to catch up to his large bonuses.

However, Gangrel does have a bit of an issue: his HP, luck, and defenses are not very high, which can put him at a disadvantage against his enemies. He also cannot support anyone except for Robin (or Morgan if Gangrel is his father), which can be troublesome when trying to pair Gangrel up. Due to this, he does need to be treated with a little more care, as he is not going to be able to take multiple hits. However, Gangrel's high Speed and Lucky Seven skill helps accommodate for his relative fragility, allowing him to dodge a fair share of attacks.

Gangrel is best suited as a Trickster due to his workable magic stat. Thus, a character like Gaius who does not have that good of a Magic stat makes a more logical choice for an Assassin. However, Gangrel can go into the Assassin class to acquire the Pass skill, which can boost his utility further, as he will be able to walk through the opposition. All in all, Gangrel is as solid of a utility unit as there is, especially in Hard or Lunatic Mode due to the bonuses he gets.

Gangrel can go into the Barbarian and Dark Mage classes. Gangrel's biggest niche is being a solid Trickster without needing to be level-grinded, but some alternate classes can give him some really good skills to work with. Despoil is not that great of an ability on Gangrel due to his lesser Luck rating; however, he can still acquire Gamble, Wrath, and the Axefaire skills from the Barbarian line. This allows him to have higher chance of criticals or increase his utility even further. Gangrel is well-suited to use the Vengeance skill from the Sorcerer class due to his high Skill and lesser defenses, especially in combination with Wrath. As a Dark Knight, Gangrel will have less Magic and Defense than Tharja, but higher Skill, Speed and Luck. However, Gangrel can just simply acquire the Lifetaker skill to boost his durability. Gangrel is still best suited as a Trickster, but skill combinations can help boost his utility.

Plegia's Mad King
The King of Plegia, who thirsts for battle. Together with Aversa, he begins a war against the Halidom of Ylisse. Appears in Fire Emblem Awakening.

Gangrel - Mad King
With the slaughter done, Gangrel retired to obscurity. While some claim he found another kingdom to rule and ruin, others insist he ended in the gutter. All agree he was dead within a matter of years.

Gangrel and Robin
Many wrote of Robin's legendary exploits, but accounts of her origins and character varied. Scholars, poets, and bards agreed on one thing alone--she loved her husband, Gangrel, above all else.

Gangrel is an antagonistic Mirage that resides in an Idolasphere of Shibuya, Illusory 106 and has taken control of fashion photographer Nobu Horinozawa. He has the ability to detach his head from his body. After being separated by Nobu, he fights the party but is defeated, screaming as his head fall to the ground.

Gangrel later reappears in Illusory Dolhr, having been revived by the Shadow Dragon, but is defeated once again.

Gangrel is illustrated in the trading card game Fire Emblem Cipher with the following cards: 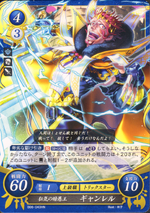 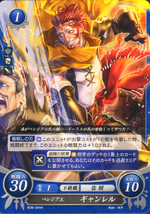 Gangrel means wanderer or beggar; it is also related to the word "gangly".