Knight
[view]
Gant is one of the main characters of the Fire Emblem: Hasha no Tsurugi manga. He is an honorable and loyal armor knight of Tania and both a friend and bodyguard of princess Tiena. After Tania was defeated by Bern's forces, Gant worked for Bern's allies to ensure Tiena's safety in their hands. When he discovers they had no intention of keeping Tiena alive, Gant fights back, but is crushed by an enemy Manakete. He is rescued by Al, a young rebel that he helped capture previously. Outside the town, Gant tells Al that he can learn about the Fire Emblem if he helps. Tiena and Al agrees to help save her.

On their way to the Graizel Execution Court where Tiena is being held, Gant and Al are ambushed by Tanian knights posing as bandits. Gant also reunites with his fellow knight and close friend, Warren. However, when the knights learn that Tiena is at Graizel, they refuse to help and Gant is forced to go with just Al. Gant and Al end up getting trapped by Graizel, but fortunately the Tanian knights had a change of heart and come to help them. In the end they are able to rescue Tiena and Al, Gant and Tiena continue the fight to repel Bern's invasion.

In a great battle with Bern forces, Gant saves a young Pegasus Knight, who later reveals herself as Celdia, princess of the Ragna territory. It becomes apparent that Celdia is infatuated with Gant. Gant saves her a second time when Bern ambushes Ragna and ends up seriously injured. In his weakened state, he reveals that he had known Tiena ever since they were children. They were great friends until one day, when Gant's father died saving Tiena. Gant didn't want to see Tiena again and decided to leave Tania. As he left, he was attacked by bandits and Tiena saved his life using her healing magic, even though she exhausted herself in the process. After that incident, Gant swore that he would always protect her.

Later, Gant helps Al and Roy fight in the Western Isles. After Etruria is liberated, Gant is promoted to a General. When the war ends, he marries Celdia and together they have eight children.

Gant is illustrated in the trading card game Fire Emblem Cipher with the following cards: 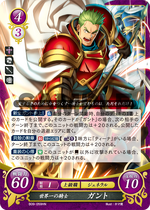 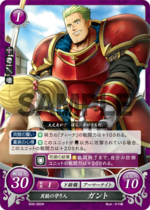 Sketch of Gant by Kotaro Yamada from a Fire Emblem 0 (Cipher) presentation.

Gant as a General in Fire Emblem 0 (Cipher).