Fighter
[view]
“Yes. To prepare myself for battle, I visualize the enemy in front of me. Then, during battle, I can focus all my attention on them. If you want to survive this war, you must focus all your attention on the enemy.”
—Garcia talking to Neimi in a support conversation

Garcia is a playable character in Fire Emblem: The Sacred Stones. He can be found in Chapter 2 of the game: The Protected. In the chapter, bandits are attacking villages in the area of Ide and Garcia and his son narrowly escape their hometown to get away.

In the level, Eirika and her small group arrive with a mountain range separating them from Garcia and his injured son, Ross. It is suggested that the player sends Vanessa to fly over the mountain range and bring Ross over so that he can be healed by Moulder and protected from further harm. Garcia can (usually) take care of himself. After Eirika talks to Ross, the player can use Vanessa to put Ross on the other side of the mountain so he can talk to Garcia. They do not need to recruit him in the chapter, however, as he will automatically join after the battle's conclusion, though he will not join if Ross dies.

Garcia is a villager from Renais who was once a mighty military leader, well-respected in all the countries of the continent. However, he retired from the army when his wife Risa died, in order to raise their young son Ross; he laments that he spent so much time focused purely on the military and did not spend as much time as he could have with his wife, and is thus dedicated to being a good father to his son.

One day, however, Garcia is plunged back into war when his village is destroyed, forcing Ross and himself to fight their way past the bandits to escape—This battle brings them into a meeting with Eirika's group early on in their mission. Seth, who has admired Garcia ever since he was a squire, discovers his identity and asks him to join the troupe, but Garcia is reluctant until Ross decides to join as well to prove himself to his father—Then, accepting that he does not have to shelter his son any longer, Garcia takes up his role as a fighter for Renais once more.

Garcia is a fierce fighter, but a gentle man off the battlefield. He greatly enjoys life and likes to have fun by involving himself in physical activities like archery. In a support conversation, he becomes friends with Dozla, the berserker who is around his age: the two will then have fun trying their hands at archery, magic and other methods of fighting together. Also, his supports with Seth show that his wilder side is resurfacing after many years of laying low; in Seth's words, "we have awakened an incredible warrior."

Garcia tries to diminish his reputation as a great military leader because his son Ross believes he must live up to and surpass that image his father had. Garcia, however, would rather Ross be more careful as, after losing his wife, he is very afraid of losing his only child, which is shown in their supports.

In Neimi's support conversations, he reveals he knew Neimi's grandfather from his days as a soldier in Renais Castle; the man was dubbed the "Single-Arrow Legend" Zeltha for his prowess in the bow, for he never needed more than one arrow to dispatch his target even when he went hunting. It is further evident in conversations that he has with Neimi that her grandfather had passed on some of his training skills to her, like staring hard at something for prolonged periods of time to strengthen her eyesight.

Garcia joins early on with good bulk and decent offenses. He can double slower enemies such as soldiers, armor knights and some units wielding steel weapons or heavy tomes but, will face problems as his 20% speed growth limits him long term. The 1 (or 2 if on Eirika's route) speedwing you get from Amelia combined with promoting to Hero may bring him a few notches (+2 from Hero and +2 or +4 from the speedwings bring him to 11AS/13AS by default) but, other units face competition for them as well. Often, he will max out HP without even trying to, and his high strength isn't something to scoff at. Although promoting into a Warrior will only give him bows, Warriors have higher strength caps than Heroes, which may fit his "slow but strong" build better. On the other hand, the Speed boost from Hero, as well as the ability to wield lightweight swords, may push Garcia over the edge into doubling, and despite the lower cap, a Strength-capped Hero should be able to handle most threats anyway.

Ross: Dad!
Garcia: Ross?! Boy, what did I tell you!? What are you doing here? Don't worry about me. Hurry up and get yourself to safety.
Ross: Did you really think I could just run away while you fight, Dad? You taught me that fighters fight for what's important to them! There's no way I'm leaving! I'm fighting just like you!
Garcia: Ross... All right, listen to me. We'll cut our way out of here together!

“I have no regrets. This was always my fate.”
—Death quote

“This may be my last battle. I'll hold nothing back.”
—Final Chapter Quote in The Sacred Stones

Garcia, The Warrior Reborn (甦る豪腕)
"He returned to his village to help with its reconstruction after the bandit attack. Afterward, he reenlisted in the army, serving Renais as a troop leader. His strength, valor, and experience inspired many."

A Support with Ross
"Garcia and Ross returned to their village, where they toiled together to rebuild their village. Ross grew to become a greater warrior than even his father. When he himself had a son, that child continued his family's legacy."

Garcia is illustrated in the trading card game Fire Emblem Cipher with the following cards: 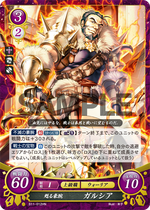 García is a surname originated from Garsea, medieval Spanish name related to the Basque word "hartz", which means "bear." It can also derivate from "garza", a Spanish word that means "heron".

Artwork of Garcia in Fire Emblem 0 (Cipher) by Yoneko.

Garcia as a Warrior in Fire Emblem 0 (Cipher).

Garcia's portrait in The Sacred Stones

Garcia performing a critical hit as a Fighter

Garcia as a Hero with a sword

Garcia performing a critical hit with a bow as a Warrior