Red Dragon
[view]
“I'll protect you, even if I die trying, Prince Kurthnaga. My life is dedicated to you. We all need you.”
—Gareth's A Support with Kurthnaga in Radiant Dawn.

Gareth is a non-playable character in Fire Emblem: Path of Radiance, and an enemy/playable character in Fire Emblem: Radiant Dawn. He is a member of the Red Dragon tribe of Goldoa, and body guard to King Dheginsea or any royal retainers in need of personal guard (as seen when he stayed near Prince Kurthnaga in their first appearance). He is notably wider-set than your average Red Dragon, and, upon transformation, he is bigger and of a darker hue than most Red Dragons (or any dragon, for that matter).

Gareth is a loyal member of the Goldoan Royal Court. Although it is not clearly mentioned, he is a high-ranking member of the court and a retainer to both his King and Prince Kurthnaga.

He is seen with Prince Kurthnaga in Fire Emblem: Path of Radiance. As the Greil Mercenaries were traveling with Princess Elincia to the theocracy of Begnion by ship, they were run ashore by Kilvan pirates. The shore they so happen to dock upon was none other than the solemn dragon country of Goldoa. They were hailed by Black Dragon prince Kurthnaga as he was strolling along the coast with royal retainer Gareth (as well as his own personal guard). After an exchanging of word and traveling gifts from the prince, the mercenaries were on their way. This is the only appearance of Gareth in Path of Radiance.

After the Mad King’s War, Dheginsea revealed the truth behind his isolationism to the other dragons, earning him their and Gareth’s absolute obedience. He appears during the third part of the final chapter, standing with King Dheginsea, Nasir, and the rest of Goldoa against the warriors of Yune. When faced with having to fight the king’s beloved son Kurthnaga, who refused and opposed Ashera’s judgement on the world, he fulfilled his duty as a member of the dragon tribe in accordance with Dheginsea’s wishes and stood in the way of Ike and company in the Tower of Guidance, as Ena and Kurthnaga are both able to speak with him, yet neither are able to sway him to their side.

He will join you if you do not kill him during the battle against the dragons.

Killing him in 4-E-3 unlocks the 'Nasir' Base Conversation in 4-E-4, while killing Nasir would unlock 'Gareth' instead. If both are alive, 'Forgive and Forget' would be unlocked. On the second playthrough, 'Ancient History' is unlocked. If none survived, there would not be a conversation. Survival is required for his recruitment.

While Dheginsea is immensely powerful, Gareth has been said to impress even Dheginsea, barely beating the latter in raw strength. While that is a source of pride for him, he could not replace Dheginsea as he lacks other kingly qualities such as pragmatism and a level head, something he strongly admires in his king; as such, he extends his unwavering loyalty to Prince Kurthnaga, Dheginsea’s son, who is under his care.

Gareth's stats are geared towards physical tanking, excelling in HP, strength, and defense while having pitiful skill, speed, and resistance, but such is considerably detrimental when all of the enemies fought after Gareth's recruitment are not only magically-inclined, but also much faster than Gareth. Gareth can be KOd very easily in these chapters due to his horrible speed and resistance, making him very difficult to utilize his strengths to some form of effectiveness.

Gareth's main niche is having Blood Tide, which grants +5 to strength and skill. This is relevant in E-5 speeds up how quick you can take down the auras that surround Ashera. While some players may opt to only deploy Ena for the tide, fielding Gareth and Ena in E-5 would help with clearing the map. It's also easier to keep Gareth alive in E-5 because of the Wardwood tiles which dot the room and the lower frequency of spirits than the previous map. With a pure water boost, Gareth can survive brushes with a few spirits.

With Kurthnaga
Gareth: I was afraid it would come to this, squared off with the very prince I'm supposed to protect. What to do?
Kurthnaga: Gareth, let me pass! I need to reach my father!
Gareth: Without the king's word, I can't let that happen.
Kurthnaga: Do you mean to fight me?
Gareth: Of course not! You know I couldn't do that. All I will do is stand here, plant my feet, and wait.
Kurthnaga: Gareth!
Gareth: Prince Kurthnaga, it has been a privilege to serve you. I wish you all the best.

With Ena
Ena: Please let me pass, Gareth.
Gareth: I will not move. Such was the king's command.
Ena: Is there nothing I can do?
Gareth: No, I'm sorry to be so hardheaded, Ena. But I must serve my king.
Ena: Maybe we're the hardheaded ones... Opposing our king and our goddess. But we've chosen our path...
Gareth: Lady Ena. Promise me you'll look after him. Keep the prince safe.
Ena: Of course. I promise... I will protect him at any cost!

Gareth was named chaimberlain to the king's new nephew, and taught him with both strictness and love.

Gareth is illustrated in the trading card game Fire Emblem Cipher with the following cards: 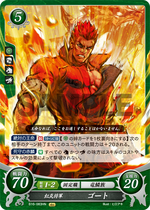 In Arthurian legend, Gareth is one of the brothers of Gawain and a knight of the round table. In his first adventure, Gareth defeats the Red Knight.