Garon (ガロン) is a non-playable character and the primary antagonist in Fire Emblem Fates on both routes. He is voiced by Akio Ōtsuka in the Japanese version and Travis Willingham in the English version.

Garon is the King of Nohr and a stern man. He is the father of Xander, Camilla, Leo, Elise and stepfather of Azura. He kidnapped the infant Avatar and raised them in a near isolated environment for all of their time in Nohr before the events of the game in a devious plan to kill Queen Mikoto of Hoshido, and remove the magical barrier that prevents his army from entering Hoshidan territories. After Nohr is hit with horrible weather and poor crop yields, he orders his children to invade Hoshido. He is ambitious and has a lust for power. He is always suspicious of others.

Several support conversations between the Nohrian siblings reveal that in his youth, he had a very different demeanor towards his children, being a very doting and loving father. However, he also frequently indulged in his passions, and never could leave a woman he'd once loved. His many mistresses began jockeying for his favor, even to the point of murdering one another's children. It's thought that this unhappy family life is what eventually hardened him into the person he is at the start of the game.

Before the events of Fates start, Garon exiled the Avatar to North Fortress as they were not strong enough to his expectations. He would only let them out if they could prove themselves to him. After the Avatar bests Xander in combat, Garon allows the Avatar to return to the Nohrian capital. At the castle, Garon gives the Avatar the Ganglari and has them use it on some prisoners from a recent skirmish, which consist of two Hoshidans along with Rinkah and Kaze. After the Avatar defeats the prisoners, he then orders them to execute them, to which they refuse because they are already defeated. Angered by their refusal, he uses his magic to kill one of the prisoners. Before he can kill Rinkah, the Avatar blocks it with Ganglari, angering him even more. He then orders Xander to kill them, but after a short argument and battle, Leo "kills" them instead, pleasing him before leaving to decide the Avatar's punishment.

Later on, the Avatar, along with Elise, wait outside Garon's room when they hear commotion. He is startled when he hears them at first, but after the two apologize to him for the recent event, lets them in. To make the Avatar more useful, he orders them to scout a supposedly abandoned Hoshidan fort with Hans at the Bottomless Canyon, and return when they give him a status update on it.

If the Avatar sides with Hoshido, Garon is not upset by their choice at all, and calmly orders Iago to kill them by any means of his likings. Later on, when the Avatar and their Hoshidan allies broke into the castle, Garon sends Iago to stop them, but he fails. After killing Xander, the Avatar and their allies find Garon in the throne room, and he mockingly express his congratulations on them making it this far. Garon tries his best to fight the invaders but fails and "dies". However, he managed to survive their assault and harnesses the power of the Dark Dragon to transform into its form, and with new strength attacks them again. Despite gaining the new power, it is not enough and he dies battling them.

Garon is shocked and angered that the Avatar had returned, knowing that they had been in Hoshido and that now know their true origins and his kidnapping of them, and agrees with Iago that they could be a Hoshidan spy and order Xander to kill them. He refused, so Garon asked the great dragon Anankos (through a stone effigy on the ceiling) on how to deal the matter, and he then order the Avatar to suppress the Ice Tribe's rebellion alone to prove their loyalty, to the Nohrian siblings' shock on the virtual suicide mission, this is because he wanted the Avatar to suffer. The plan was foiled however by Xander sending Elise, her retainers, and Silas to aid them after he overhears this.

However, Garon learns of this, and threatens to execute the Avatar, but is stopped when both Elise and Xander offer their lives instead since they acted out of his orders, so Garon reluctantly allows the Avatar to be his child again. He then orders the Avatar to conquer Notre Sagesse, and after that is finished, suppress the rebellion of Cheve, but before they left for Cheve, the Avatar re-introduced Garon to his kidnapped daughter Azura, but he shows cold detachment to her, and ordered them to leave.

After the uprising in Cheve is put down, Garon, along with the Nohrian army, watches a play from a mysterious songstress. Before the play starts, Garon talks to the Avatar, telling them that he is pleased with their actions on crushing the rebellion, as Hans told him. However, Garon is unaware that Hans had done most of the killing and not the Avatar. After the songstress' movement causes Garon to be put in a "curse", as Iago puts it, he orders the Avatar to kill all the songstresses, to their horror. However, this is quickly interrupted by Kumagera and his assassins, so the mysterious songstress manages to escape before her identity is revealed to him.

Garon, along with Iago, oversees the invasion of Nohr and are pleased with their progress through Hoshido territory. As the royal siblings open the door to the throne room, they find a gigantic slime like creature, who reveals itself as Garon, to their shock. Garon and a group of powerful invisible soldiers attempts to kill them on the spot, due to them seeing his true form, but they fail and Garon is eventually killed by the party.

Monster Garon's appearance is hinted at in both routes during Azura's dance, where her graceful and elegant Hoshido dance only causes the monster discomfort and problems with breathing, while her aggressive and forceful dance in Conquest causes unbearable pain to Garon and his eyes to roll back.

It is revealed that the real Garon had died years before the story began and the Garon present is a servant of the King of Valla, Anankos, who is little more than a corpse imbued with a semblence of life by Anankos' power and stripped of his free will. His mission is to destroy both the kingdoms of Nohr and Hoshido for "betraying" its master. The undead Garon makes less appearances in this route, compared to the other 2 routes.

In his first appearance in the cutscene before Chapter 9, he is seen speaking to his stone effigy of Anankos on the ceiling, a little surprised about the fact the Avatar survived the earlier explosion at Hoshido and knowing the truth of the entire situation. He decides that the Avatar being afraid and wanting them to suffer isn't enough, and that decides that the Avatar simply will have to be disposed of. He then erupts into maniacal laughter.

In his second appearance before the start of Chapter 14, Xander and Leo arrive in the throne room and see Garon looking manipulated, telling them to continue the war against Hoshido, and tells them that he wants to destroy not only Hoshido, but also Nohr itself. This causes both Xander and Leo to reconsider their earlier dismissals about the Avatar's claims about Garon being manipulated by the real culprit, the Invisible Kingdom of Valla, and they eventually join the Avatar's cause.

He makes his last appearance near the end after completing Chapter 27 of this route, offering his body for Anankos's use, only for Anankos to eat him to gain his blood to be at full power again.

Garon is portrayed as a ruthless, mean, cold-hearted man that has no mercy for anyone who does not please him or dares to defy him. He has been known to execute people on the spot without any sort of rationale, even in front of his youngest daughter. His ruthless nature extends heavily to his adopted "child", the Avatar, who is constantly ordered by Garon to perform inhuman tasks in order to "earn his trust." Actions ranging from slaughtering innocents are among the most notable, his children either reluctantly follow through with orders, or to find ways to limit the damage, but they never outright defy him. He has also expressed cold detachment to Azura, the step-daughter of his second wife, going so far as to refuse a prisoner trade between the Avatar and Azura. He has little trust even in his subordinates, ordering Iago to kill the Avatar repetitively, yet considers him nothing more than a foolish pawn.

However, several years prior, Garon was portrayed in a different light. Leo notes that Garon would do many things stereotypical of a loving father, such as letting Leo ride on his shoulders. While he enjoyed showing off his strength, he did not have plans of conquest prior to the death of Arete, his second wife. Apparently Garon was quite the ladies man as well and easily won the hearts of many women including his first wife Katerina and Arete. However his love for the women of his life prevented him from breaking their hearts, causing his four children to come from different mothers. After numerous attempts by his concubines to assassinate the other children and other women to gain control of the throne, Garon became much more hardened, suspicious of any sort of trust because he felt that he could be taken advantage of if he was not careful. Because of his cold demeanor, Anankos easily possessed Garon and made him his personal slave. 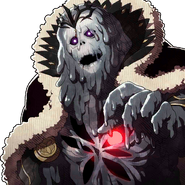 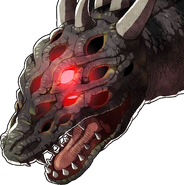 Dragon Garon's Portrait.
Add a photo to this gallery