Located in central Fódlan amidst the mountains, Garreg Mach Monastery is the headquarters of two separate entities: the Church of Seiros and the Officers Academy. It is a neutral territory, not governed by any of the three nations of Fódlan. In addition to being a religious site, the monastery is home to an elite order of knights.

Garreg Mach Monastery can be freely roamed and explored, and once Byleth has visited a part of the monastery, the player can use fast-travel to transition to that location instantly. While roaming the monastery, Byleth can take part in numerous activities to affect their training as well as the training of the students under their tutelage.

Underneath Garreg Mach is a massive underground complex known as Abyss, which can be accessed through the monastery's secret tunnels. However, it has been more of a rumor than truth, though this is due to the fact that anyone coming to the Abyss is locked up and the Abyssians who live inside seal off all entrances. The Abyssians are people who have been wronged in life or wish to get away from it all, and only a few select members of the Church are privy to their existence.

With the sudden rebellion instigated by the Adrestian Empire, Garreg Mach Monastery is besieged by the Imperial army, leading to a fight between the Empire and the Knights of Seiros along with representatives of the Leicester Alliance and Holy Kingdom of Faerghus there to help ward them off. Depending on which house Byleth leads, they find themselves on different sides.

While Byleth and the students are able to halt much of the initial wave lead by new Emperor Edelgard, the next wave proves to be too great for the forces currently in the monastery. Left with no other options, Rhea transforms into a dragon in order to fend of as much of the forces as she can. Seeing her piled on by demonic beasts, Byleth steps into the fray to help, but Thales appears and hits them with a spell, causing them to careen into the valley below. Rhea, weakened, disappeared in the ensuing chaos, leading to the Adrestian Empire overtaking the Monastery and seizing it. For five years, neither Byleth nor Rhea could be found.

Byleth and the Black Eagle students join Edelgard in their attack on the monastery. After defeating Rhea, she transforms into a dragon and destroys a building to send rubble down to trap Byleth. Despite this, the Adrestian Empire annexes the monastery and forces Rhea and the church forces to flee to the Holy Kingdom of Faerghus.

Over the course of five years, the monastery falls into disrepair, becoming a haven for thieves who pillage the nearby towns relentlessly. Eventually, the thieves were taken out by the combined efforts of Byleth, the House leaders, and all of their former students.

In all routes, the Empire continued to keep a watchful eye on the monastery in the event that the Church would try to use it as a base. Randolph was tasked with this duty, and when he learned that the monastery had been reoccupied, he led an army of Imperial soldiers to drive them off. This was a disaster for the Empire, and Randolph was killed in the ensuing battle. The monastery would then be used as a base of operations for Byleth and their associates.

Now used by the Empire as a staging ground in their attempt to unite Fódlan, Byleth returns to the monastery after their five-year coma. Edelgard and the others have formed the Black Eagle Strike Force in their stead, and reoccupied the monastery, restoring it as best as they could.

With Byleth's aid, the Empire is able to annex the Alliance into their territory, allowing them to focus on the Kingdom and the Church. Being the original owners of the monastery, Rhea leads the Knights of Seiros into battle, attacking with two forces; a main force to distract the bulk of the Imperial army, while an expedition force would sneak around to the side, led by Seteth. The Black Eagle Strike Force intercepts the expeditionary unit and routs them, forcing Rhea to abandon the fight and order a full retreat.

Following the end of the war, the Empire reforms the Church and reinstates Garreg Mach as a learning institution.

There are numerous locations within the monastery, which can be fast-traveled to during exploration via the monastery's map.

The second floor is home to several different facilities:

The third floor is only accessible during the War Phase:

Various activities, facilities, and events occur in the Monastery, allowing the player to earn rewards and improve relationships with the students and faculty.

Garreg Mach Monastery was added to the game as a DLC stage alongside Byleth. The stage is generally on a flat plane with no fall zones, but also transitions into different layouts and locations about every two minutes. The stage transitions between four different areas of the monastery:

Concept art of Garreg-Mach Monastery's during the daytime. 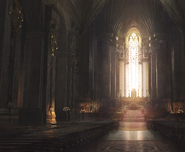 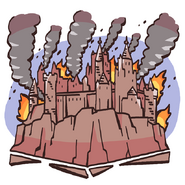