Leader of the plegian bandits

Garrick (translated Geriba in the Japanese version) is an enemy boss character in Fire Emblem Awakening and an enemy Mirage in Tokyo Mirage Sessions ♯FE.

Appears in the prologue chapter. The leader of the Plegian Bandits. He is a violent and cruel man.

Garrick leads a small group of Plegian Bandits to destroy and raid Southtown. He is a part of Plegia's plan to instigate a war between them and Ylisse. However, the Shepherds arrive and defeat the bandits.

He appears as an enemy Mirage at the beginning of the game, where he possesses Teru Gojyuin's body. Garrick is the game's first boss, appearing before Itsuki Aoi just after he becomes a Mirage Master. He is wild and destructive, and proud of his immense power. He wields a giant axe-like weapon. Garrick is redesigned as four eyed animated suit of armor wearing a cape. Teru's head, discolored by his possession, protrudes from the top of Garrick's helmet. 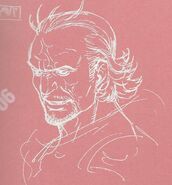