The Garuda (ガルーダ Garūda) is an enemy-only Monster class first introduced in Fire Emblem Echoes: Shadows of Valentia. The crimson variant of the Gargoyle and Deathgoyle, the Garuda is a menacing monster who appears rarely in the Thieves' Shrine, Sylvan Shrine and Fear Mountain Shrine.

In Hindu, Sanskrit, and Jain mythology, Garuda is a legendary bird-like humanoid (or bird); It served as the personal mount of Vishnu, the Hindu god of sustenance. 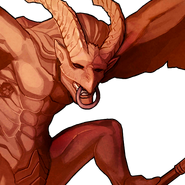 Generic class portrait of a Garuda. 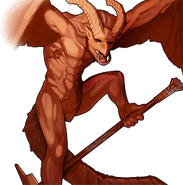 Portrait of the Garuda class.

Village sprite of a Garuda.