Not to be confused with Gatekeepers, a type of enemy from Fire Emblem Warriors.

Gatekeeper of the Garreg Mach Monastery

As his title suggests, the gatekeeper dutifully watches over the entrance to Garreg Mach Monastery where he can usually be found when Byleth chooses to explore the monastery on a free day. When talked to, the Gatekeeper greets Byleth and talks of current/upcoming events. During Chapter 9, speaking to the gatekeeper lets Byleth choose the student they will see at the Goddess Tower, so long as they have a B-support (or C-support on some students) with said student. Ignoring the gatekeeper will choose a student at random.

Even after the five-year timeskip, the gatekeeper returns and resumes his post when the monastery reopens. However, in the Crimson Flower route, his unnamed brother takes his post as said brother is less devout to the Church of Seiros than the gatekeeper during the Academy Phase. Nonetheless, even his brother who is also referred to as "gatekeeper" greets and converses with Byleth in a similar fashion.

The gatekeeper's dialogues are often comical in nature and play upon the idea that he's actually rather unobservant and inept at his job despite his enthusiasm towards it. No matter the situation, he almost always has nothing to report despite what events may be occurring on the monastery grounds during a given month.

He also enjoys fishing and holds the Knights of Seiros, particularly the Relic-wielding Catherine, in high regard. However, he is afraid of the Death Knight and Judith. Gatekeeper is also well-versed on the history and culture of Fodlan and is more than happy to divulge information.

He is shown to be quite emotional and looking for love during the Academy Arc, and longs to visit Deirdru and Fhirdiad on holiday after the end of the war.

The Gatekeeper's brother who takes his place in the Crimson Flower route displays the same personality as his sibling, with the only noticable difference being his loyalty to the Adrestian Empire over the Church of Seiros.

Nothing to Report
The guard who watches over the gates of Garreg Mach Monastery. A kind man who cares deeply for all Heroes who pass through his gate. Appears in Fire Emblem: Three Houses.

Winning Choose Your Legends 5 is the ever charming Gatekeeper of Garreg Mach Monastery with a Brave form that matches his achievement. Despite being a Green Infantry mage, a fairly common combination, he is a very unique one and a strong one at that. He packs a strong 37 Atk and solid mixed bulk, scoring 81 in physical bulk and 77 magical bulk. As a result, the Brave Gatekeepr is more akin to an Armored unit stat wise as he trades these for a low 17 neutral Spd. While he may not have the same perks as an armored unit, namely having armor skills, he more than makes up for this thanks to his wonderful base kit that makes him into both a impenetrable wall and an excellent chokepoint maker.
Charging Horn is more of a supportive item thanks in part to his Def+3 flat increase to make him a better physical wall. Based on the number of allies within three columns and rows centered around the Gatekeeper, he grants Atk/Spd+5 to all allies in this range. In addition, based on how many of his allies are within that range. If there is at least 1 not including himself, he inflicts an Atk/Res debuff on foes in that column/row range x2, meaning that 1 will result in -2, 2 will result in -4, and maximizes at 3, resulting in a -6 debuff. Finally, if he has at least 3 allies within his range, then his foes loses the ability to perform follow-up attacks. This bloated weapon can stifle opponents easily if his allies remain in range of him to maintain the full effect
His unique Brave skill is Detailed Report, which operates like Obstruct, but much better. Melee units cannot move through one space adjacent to the Brave Gatekeepr and Ranged units cannot move within two spaces of him, often forcing units to have to attack them if they want to get to units behind him. Finally skills that allow warping like Flier Formation, Wings of Mercy, and Escape Route cannot do so if they are attempting to warp to a tile within four spaces of him. While it sacrifices a bit of combat utility, this is an excellent skill that stops many common aggressive strategies using low health and Wings of Mercy dancer units, sometimes stranding units and preventing further aggressive map tactics.
Harsh Command+ converts an ally's visible penalties in buffs and removes negative status effects until their next turn. Close Reversal is an upgrade to Close Counter as it allows him to counterattack against melee range units and gains Def+5. Joint Drive Defense grants Def+4 to allies within two spaces of him during combat. If he is also within two spaces of an ally during combat, he gains Def+5 as well.

The Brave Gatekeeper's whole kit relies on the range of his tome to maximize its effects, thus dealing with his allies can whittle down his effects. If targeting him in particular, Null Follow-Up can removed his follow-up prevention, thus allowing most units from fully exploiting his low Spd for follow-up attacks. This skill is commonly found on Red units which makes them solid counterpicks. Because he is mainly a defensive unit, baiting him out thanks in part to bad AI can draw him into attacking a Red unit that can deal massive color advantage damage overhim. While extremely uncommon, Pass completely bypasses Detailed Report thus preventing him from stopping them from targeting his backline.

The Brave Gatekeeper's only empty slot is his Special skill and given his emphasis on Def, Bonfire generates incredible true damage especially under all of his Def boosting skills. His Seal is best filled with either Quick Riposte as it allows him a guaranteed follow-up attack if his foe initiates combat or Attack Defense Form as it syncs naturally with his tome's range requirements and gives him both Atk and Def stats, two valuable increases to his general playstyle.

The gatekeeper makes a cameo appearance on the Garreg Mach Monastery stage as a background NPC on the Marketplace portion of the stage.

The gatekeeper is illustrated in the trading card game Fire Emblem Cipher with the following cards: 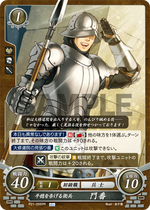 Gatekeepers are a type of provision that authorizes access to a distinct location, most often a city gate.