Ben Lepley
[view]
Gazelle (ガゼル Gazeru) is an enemy boss character from Fire Emblem Gaiden. He is a Rigelian soldier that will oppose Alm around the end of Act 3: War of Deliverance.

Owing to the minor involvement with the game's plot, Gazelle is not well-developed. Several aspects can of his character can still be gleaned based on the lines he speaks, however. For one, Gazelle can be considered a prideful individual, already calling out against his enemies before analyzing the situation even when the odds are against him. One can also tell based on his lines of defeat that he refuses to admit he underestimated his enemy, believing it was a disgrace as a knight fighting under a powerful empire to lose to such a "worthless vermin".

“You have taken your last step in this realm. Now prepare to visit the next!”
—Gazelle's battle quote
“To die at the hands of worthless vermin... How shameful...”
—Gazelle's defeat quote

Gazelles are antelopes native to Africa and Asia.

Concept artwork of Gazelle from Echoes: Shadows of Valentia. 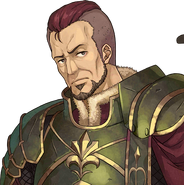 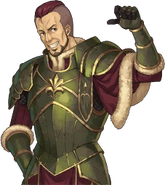