Gazzak (ガザック) is the boss of Chapter 1 of Fire Emblem: Shadow Dragon and the Blade of Light and its remakes. He is both the very first boss that Marth faces in the game and the first boss to appear in the franchise.

Gazzak was a member of the Galder Pirates, a gigantic band of pirates who with their captain Gomer took over the harbor town of Galder and made it their hideout. Leading an army of pirates, Gazzak attacked the nearby Kingdom of Talys, taking over the castle and endangering King Mostyn.

Caeda informed Marth who had taken refuge in the island kingdom during his exile after Dolhr's takeover of Altea. Together with Caeda, Marth led his remaining knights to fight and eventually rout Gazzak and his forces.

Gazzak's actions would convince Marth he was finally ready to play his part in the War of Shadows.

Gazzak appears towards the end of the first part of the OVA, leading an attack on Talys with his pirates. He has a duel with Marth outside of the castle. He threatens Marth and Caeda's life and attempts to escape, but is cornered by Ogma, Barst, Cord and Bord. Ogma then finally defeats Gazzak, and he falls from the castle and plummets to the ground.

In Chapter 1 of Fire Emblem: Genealogy of the Holy War, there is a Fighter classed arena enemy named Gazack (the fan translation of Gazzak).

There is a capturable boss character in Fire Emblem Fates that is named after, and heavily based on Gazzak. See the page for this Gazzak. 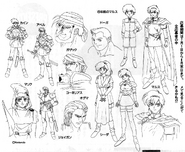 Concept art of Gazzak and other characters in the anime.

An image of Gazzak in the first episode of the anime