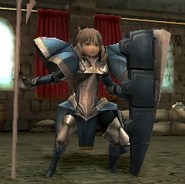 Enemy General map sprite from Shin Monshō no Nazo.
Add a photo to this gallery