General of Crimea
Commander of the Crimean Royal Knights

[view]
“Your Majesty, allow me to reiterate: that is exactly what I wish. No matter the task, and no matter the odds, I can only succeed at it so long as you depend on me. I am yours entirely, Your Majesty.”
—Geoffrey, in a base conversation with Elincia

Geoffrey is a playable character from Fire Emblem: Path of Radiance and Fire Emblem: Radiant Dawn. He is a Crimean general, and the commander of the Crimean Royal Knights. Geoffrey is the younger brother of Lucia, and is Elincia's milk sibling and a close friend of Bastian. His weapon of choice is the Brave Lance.

A royal knight of Crimea, and a member of house Delbray, he and Elincia have been friends since childhood. After being separated from Elincia, while still filled with regret over his failure, Geoffrey disguised himself as a merchant along with Lucia and Bastian while they awaited her return.

Geoffrey is first introduced as part of a collusion between himself, Lucia and Bastian, where they make plans to celebrate Elincia's return to Crimea with the Greil Mercenaries and their forces. He then agrees to stand guard by Delbray Castle, while Lucia and Bastian leave to join up with Elincia.

However, after the two manage to catch up with Elincia, the Daein forces proceed to mount an attack upon Delbray Castle. Despite being advised to leave Geoffrey and escape, Elincia persists in convincing Ike in going to his rescue.

Geoffrey makes his first appearance in Part 2 of the game, where he is observed to be the leader of the Crimean Royal Knights. He then leads them into laying siege upon Castle Felirae, later realizing that it is a trap laid by Ludveck's forces.

Geoffrey and the Crimean Royal Knights will then leave for Castle Crimea hastily, showing up as reinforcements for Elincia's forces in the Chapter 2-F. They will then proceed to charge forward and overwhelm Ludveck, thus trapping the rebel forces. After the events of Part 2 come to an end, Geoffrey will be left to guard Crimea in Elincia's absence, as she decides to join the Laguz Alliance.

Geoffrey will reappear in Part 4 with Volke and Bastian in tow, and may then be chosen to enter the Tower of Guidance.

After the defeat of Ashera Geoffrey will return to Crimea & will be wed to Elincia becoming the king consort of Crimea if they share an A rank support at the end of the game.

Geoffrey is a rather serious and compassionate individual, and has dedicated his entire life to the service of Elincia. He is renowned for being an individual who takes his duties very seriously, and often comes into odds with the Crimean nobles.

Geoffrey's close bonds with Elincia has, in the course of Radiant Dawn, caused the tongues of the gossiping commoners to wag, where they speculate that he is secretly courting her. This has proven to be true to a certain extent, as Geoffrey does, indeed harbor feelings for Elincia. This may be observed when Elincia falls in combat in Radiant Dawn, where he is observed to react with a distraught response, asserting that "life will be meaningless without her". This is further proven when the pair share an A level Support in Radiant Dawn, results in their eventual marriage.

Beyond his possible marriage to Elincia, Geoffrey also shares close bonds with a small group of individuals. These include Kieran, sub-commander to the Royal Knights, Prince Renning, his mentor and predecessor, as well as Bastian. To a lesser extent, Geoffrey also shows some rapport with the assassin Volke, as shown in the interaction between the two in Part 4 of ''Radiant Dawn'', and Calill and Largo of Greil's Retreat.

Geoffrey's base stat distribution, as well as his fairly high growth rates, allow him to be an effective unit without any need for training or level grinding. He also has Paragon, which allows him to reach level 20 fairly quickly and maximize his effectiveness; he already has sufficient weapon ranks and will not suffer from the effects of Paragon on weapon experience. Although his stats can be a bit lower than trained Paladins like Oscar or Kieran, he still has high enough stats that he will not suffer offensively nor defensively.

Geoffrey is a unit with solid bases and decent growths in this game, but his usefulness as a unit is hampered by his poor availability and the low Stat Caps of his given class. He possesses solid growths in Strength, HP, Resistance, and Skill, but his Speed and Defense are consistently low, which may serve as a means to further hinder his potential. Due to Paragon however, he can quickly be trained if fed enough, and then become more than capable of holding his own in the Tower of Guidance late in the game.

“The rebirth of my homeland is almost before me, and yet... Is it possible I may not witness that glorious day? I will not die... I cannot go and leave Crimea like this... Princess!”
—Normal Death Quote
“Glory to...Crimea! Sister...Bastian... Protect...the...princess...”
—Death Quote in Chapter 24, as an NPC unit.

Geoffrey: Men, you have to...keep fighting! Just leave me... Fight for Her Majesty!
Kieran: General Geoffrey... Get up, man! Fight! We can't go on without you!
(Geoffrey dies; Game over)

Geoffrey: They got me... Your Majesty... Please forgive me.
Kieran: General Geoffrey! No! Open your eyes! Your orders, General! General! (If Kieran is alive)
(Geoffrey dies; Game over)

Geoffrey: Ugh... Defeated...
Elincia: ...Geoffrey! Pull back! You can't!!!
Geoffrey: What do you mean? This wound? Hardly—gnk!--worth noting...
Elincia: Withdraw! Your queen commands it!
Geoffrey: As you wish. In your service, milady.
(Geoffrey retreats)

Geoffrey: Queen Elincia... I lived...as your sworn sword. And even in death, I promise you... I will protect... your honor...forever...

As captain of the Royal Knights and a model of chivalry, Geoffrey served his queen and country all his days.

Geoffrey's chivalrous nature and loyalty to Queen Elincia ensured that all of Crimea supported their marriage.

Geoffrey is illustrated in the trading card game Fire Emblem Cipher with the following cards: 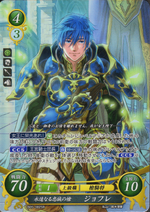 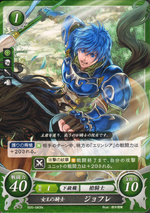 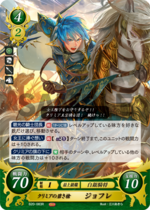 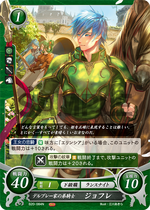 Geoffrey is a Germanic name, brought to England by the Normans. It is derived from the elements frid (peace) and either gawia (territory), walah (stranger) or gisil (hostage). It was a common name amongst the medieval English nobility.