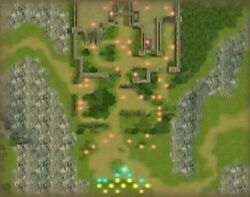 Chapter script
[view]
“Insurrection erupts across Crimea. The wounds Crimea suffered during the conflict with Daein have finally begun to heal, and it should be rejoicing in its hard-won peace. How is it that the fires of rebellion have been lit?
Bastian, Queen Elincia's most trusted advisor, widely acknowledged for his political savvy, is on a mission to Daein, and the Greil Mercenaries, the original authors of Crimea's recovery, are nowhere to be found.
Queen Elincia, close to despair, has nonetheless ordered the Crimean Royal Knights to restore order in Felirae. Her only wish is to win the coming battle, so that she may stave off a civil war.”
—Opening Narration

Geoffrey's Charge (騎士団出撃す Kishidan shutsugeki su) is chapter 3 of Part 2 in Fire Emblem: Radiant Dawn; it is the penultimate chapter of part 2. Marcia is available again. Geoffrey is the leader, and because of this, the battle will be lost if he dies. The same thing happens if it's Kieran that gets killed. Previously recruited characters are unavailable until the next chapter (except Lucia, who is unavailable for the rest of Part 2).