Nathan Hedrick
[view]
“If your desire to win is stronger than your opponent's, you've already won. Your mind is your most important weapon.”
—Gerik in a support conversation with Ross

Gerik is a playable character in Fire Emblem: The Sacred Stones. He is the leader of a small group of mercenaries. Gerik is known to be kinder and more concerned about his men than most mercenary leaders, which is why Tethys and Marisa harbor feelings for him. He hails from Jehanna and is a very experienced and skilled swordsman. He is better known as the Desert Tiger. Gerik is good friends with Saleh and Joshua.

From his childhood and throughout his career as a mercenary, Gerik had always detested violence, although he had a strong conviction to protect those he loved dearly. His need to protect his friends started his career as a mercenary and spurred him on when his friend was killed, the need shifting to his new friends made from his career. It is revealed in his A support with Saleh that he is responsible for the death of Gerik's friend, Zabba, but Gerik forgives him.

Gerik is also observant and is guileful, shown when he sees through Joshua's cheating when he duels him and when he stays with Innes after tricking the sniper when he tried to dismiss Gerik, accidentally firing the mercenary and making it unable to order Gerik and Tethys to leave his service. Despite his resentment to fighting, he also shows the fighter Garcia admiration for his prowess in combat.

Gerik's scar, according to his and Tethys's supports, was acquired during a duel. When younger, Gerik had become haughty and arrogant in combat, and so he challenged a much more experienced knight. He lost soundly, but his opponent spared him, leaving the scar on his face. He learned from the experience, becoming a wise leader in the process. In Gerik's supports with Ross, he mentions that he had been on the opposite side of a battlefield of Ross' father Garcia who was then a knight. Between Tethys' and Ross' supports, it can be inferred that Garcia is the man who left the wound on Gerik's face.

*11 in the Japanese version

Gerik is a very useful unit, with very high bases all around, passable growths, and two good potential promotions, Hero and Ranger. His decent speed base enables him to double most units throughout the game even with his low growth. His high Skill and decent Luck also complements his immense strength, allowing him to usually hit all but the most agile of enemies reliably. He comes with a Hero Crest, and whether it is used immediately or saved for later, Gerik will have no issues defeating enemies for the entire game.

Both the Hero and Ranger classes have benefits and negatives for him. Hero gives him axe access and a reliable 1-2 range option. Ranger gives him the less impressive bows, but also increases his movement to allow him to keep up with mounted units and fliers. Hero also gives Gerik an astounding fifteen constitution, which does allow him to use some of the heaviest weapons without speed loss, but makes him too heavy to be rescued and transported around by any of the game's fliers, which he does not have to deal with as a Ranger. Both have their positives and negatives, and are equally useful depending on playstyle.

He has a myriad of useful supports, as he will often be fighting in the front lines along with Joshua, Marisa, or Ross, all three having the same movement in the same tiers.

Desert Tiger
A veteran soldier who leads his own mercenary band, Gerik's Mercenaries. He's the commander of Tethys, Ewan, Marisa, and others. Appears in Fire Emblem: The Sacred Stones.

“If you live on the battlefield, you know this day will come...”
—Death Quote
“Never stop fighting. Never...”
—Final Chapter Quote in The Sacred Stones

Gerik, the Desert Tiger (砂漠の虎 Sabaku no tora)
"Gerik continued as a mercenary. Over the year, his reputation grew so great that he had more job offers than he could handle. One day, without warning, he left, never to return."

A Support with Tethys
"Gerik and Tethys remained bound to no nation and beholden to no authority. They bought themselves a leisurely retirement. Gerik taught fencing to city youths, and Tethys found many stages on which to dance."

A Support with Joshua
"After the war, Joshua challenged Gerik to a duel in hopes of pressing him to move to Jehanna. The match ended in a tie, but Gerik was impressed by Joshua's swagger. From that day forward, Gerik never left Joshua's side."

A Support with Marisa
"Gerik remained a mercenary, and Marisa became his company's fencing instructor. Gerik returned the affection she gave him, although he was troubled to learn she was clumsy at everything but fighting."

Gerik is illustrated in the trading card game Fire Emblem Cipher with the following cards: 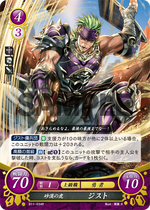 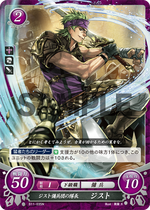 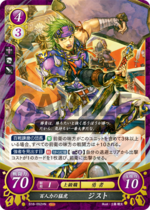 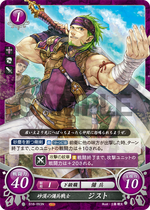 'Gerik' is probably a variation of the name "Garrick", which comes from the Germanic name elements 'gar' (spear) and 'ric' (kingdom).

His Japanese name, 'Xyst' may come from the Latin word 'xyst, xystum,' which refers to a tree-lined walk or road. 'Xysticus' is a genus of crab-spiders.