Not to be confused with the Fire Emblem Gaiden character, Jerome.

Orion Acaba
[view]
“Death will always have its due, but perhaps it will accept a few substitutions. Come, my dear Minerva. Join me on one final flight...”
—Gerome in Paralogue 11

Gerome is a playable character in Fire Emblem Awakening. He is Cherche's son from the future, and can potentially be the brother of Morgan.

Gerome was once a happy, but somewhat shy child. He had pride in his parents and bonded well with Minerva, but his parents were often off fighting Risen to protect their country. Gerome eventually lost his father, and later his mother. After Cherche's death, Minerva flew back to Gerome and stayed with him for the rest of his life. He also received Cherche's wedding ring and has worn it ever since. Eventually, Gerome receives word from Lucina that she and the other children will return to the past to prevent the ruinous future. Gerome, however, felt that no matter how hard they try, destiny cannot be changed. While he believes that the past cannot be changed, he accompanies them anyways so that he can release Minerva into the wild, as most of the wyverns in his time had been killed. In his supports with Lucina it is revealed he lent her the mask that she used to hide her identity.

In Gerome's paralogue, the bandit Morristan entered the Valmese Wyvern Valley, so he could catch and sell the wyverns that inhabit the area. Gerome is approached by a local villager to help, but he refuses. However, Chrom's army arrives to help the villagers. Cherche enters the battlefield and the two eventually talk. Athough Gerome initially refuses to fight, Cherche manages to convince him to at least fight for this battle. After the battle, Cherche talks to Gerome to introduce Minerva to his wyvern mount. As Cherche compares Minerva to his wyvern, she discovers that the two are identical; in fact, they are the same wyvern. Gerome shows her his ring, which is the same as the one Cherche is wearing. He then says he wishes that the two never encountered each other, as he only came back in time to release Minerva back into the wild. When Cherche asks why, Gerome admits that he does not want to lose his parents a second time. Cherche commends him for being so strong despite all he's been through. Gerome eventually decides, for the time being, to join Chrom's army.

When Grima is defeated, Gerome realizes that he was wrong to assume that destiny cannot change. Afterwards, he settles in Wyvern Valley. People saw him as distant and contemplative.

Tending to keep his distance from others, especially those in the current timeline, Gerome believes meddling with the past is futile and that destiny cannot be changed, leading him to be apathetic to the fact that villagers are getting killed for sport in his recruitment paralogue. However, he ends up joining the Shepherds anyways, as he still holds onto a sliver of hope that they can avert the apocalyptic future that he lived in.

A serious individual who tends to speak in a formal manner, he's always training hard to become stronger. He dislikes wasting time, and feels that the others should know their priorities when it comes to winning the war. He does not like to engage in idle conversations with other members of the army, usually keeping his distance, leading him to get lonely as a result. When prodded to do so, he can give insightful suggestions and has more to say than he seems.

He refuses to accept that the present versions of his parents are the same as his own since he is adamant about not going through the pain of losing them again, always refering to them by their first names, though he will occasionally call them "Mother" and "Father" in their supports and during certain event tile quotes. However, he also wants to ensure that his mother survives the war this time, as he was not capable enough to prevent her death. Like Cherche, Gerome shares a close bond with Minerva, and has inherited the ability to understand what Minerva is feeling by her shrieks. He affectionately nicknames her "Minervykins", but gets embarrassed when caught and teased about this.

His supports reveal that he is actually overly shy and at times sensitive, and thus wears a mask to conceal his feelings, passing this off as a method to prevent enemies from reading his thoughts. This partly backfires, as it becomes a matter of curiosity for many of the Shepherds, often with them bugging him about why he wears it, much to his annoyance. It also leads to even his friends not recognizing him when he unmasks himself at first.

Among the Shepherds, Gerome is somehow the last to fall asleep on a regular basis.

Gerome cannot be re-classed into the following class sets, but it is possible for him to inherit a skill from them.

Gerome - Masked Rider
Gerome and Minerva set out for Wyvern Valley. Many saw the rider and mount through the years, though most described the man as distant and contemplative.

Gerome and Robin
Many wrote of Robin's legendary exploits, but accounts of her origins and character varied. Scholars, poets, and bards agreed on one thing alone—she loved her husband, Gerome, above all else.

Gerome and Lucina
Gerome and Lucina were married and settled down near Wyvern Valley. While her husband never minced the few words he had to say, Lucina understood, and the two built a happy life.

Gerome and Kjelle
Gerome and Kjelle were married and settled near Wyvern Valley, which Kjelle soon refashioned into her ideal training ground. Many claimed to see her running uphill in full armor for days on end.

Gerome and Cynthia
Gerome and Cynthia were married and settled down near Wyvern Valley. Astride her pegasus, Cynthia labored endlessly to concoct more dashing ways for her husband to make an entrance.

Gerome and Severa
Gerome and Severa were married and settled down near Wyvern Valley. Severa had a knack for landing mercenary work, and as a fighting duo, she and her husband became known throughout the land.

Gerome and Morgan
Gerome and Morgan were married and settled down near Wyvern Valley. While Morgan's memory never returned, she didn't really seem to miss it, and the two lived out their days most happily.

Gerome and Noire
Gerome and Noire were married and settled down near Wyvern Valley. Noire was said to be nervous around the wyverns and rarely left her husband's side.

Gerome and Nah
Gerome and Nah were married and settled down near Wyvern Valley. The wyverns bowed to their new dragonkin mistress, and the couple became the first true lords of the valley.

Gerome is illustrated in the trading card game Fire Emblem Cipher with the following cards: 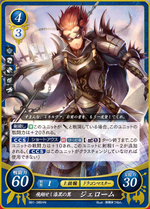 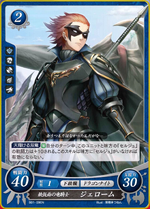 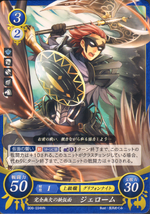 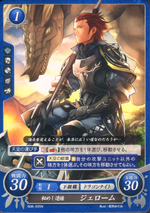 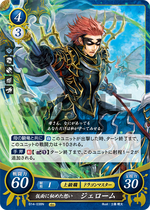