Chapter 15: An Oasis of Magic (Shadow Dragon and the Blade of Light)

Bishop (Shadow Dragon and the Blade of Light)

[view]
“You dare to oppose me, fool? You must not value your life. Cower before the might of the magic Imhullu: once forbidden, now unleashed!”
—Gharnef's battle quote in Chapter 15 in Shadow Dragon

Gharnef is an enemy character and a dark mage from Fire Emblem: Shadow Dragon and the Blade of Light, Fire Emblem: Mystery of the Emblem, and their remakes.

Gharnef is a powerful sorcerer known as the Dark Pontifex who plays a crucial role in orchestrating the resurrection of Medeus and the two resulting wars.

An unspecified amount of time before the revival of Medeus, Gharnef was once a student of Gotoh, and studied under him in the city of Khadein. Along with Miloah, who would later be appointed a pontifex of Khadein, Gharnef was one of Gotoh's two best pupils. Despite his considerable talents, Gotoh grew wary of Gharnef's wrathful and compassion-less nature, and instead chose to appoint Miloah as his heir. Gharnef was outraged and overcome by jealousy on hearing this decision, and as an act of vengeance, he stole the Darksphere from Gotoh's safe-keeping and fled Khadein. He used the power of the Darksphere to forge a new, powerful tome of his own: Imhullu. However, in the process of creating the tome, Gharnef's soul was sealed within the Darksphere itself, cementing his descent into malevolent madness.

Eventually after this, Gharnef succeeded in reviving Medeus as part of his plans to avenge himself upon all of Archanea, and forged an alliance with the dragon. Following the reconstitution of the Dolhr Empire and its army, the combined might of the two brought ruin to countless kingdoms, starting with the Holy Kingdom of Archanea. Soon after the war began, Gharnef engaged Miloah in a battle and murdered him, seizing control of Khadein. Gharnef's leadership dragged Khadein into the thick of the war, putting its magical prowess to brutal use, while Gharnef himself effortlessly supressed countless attempts to stage coups against him. By the time the war ended, his rule had caused immense damage to the city and wiped out all of its other ruling pontifices. Even at this point, he was well aware of the threat which could be posed to him should Starlight ever be created, so to prevent this from happening, he captured and hypnotized Tiki and had her defend the Fane of Raman, where the necessary materials were being held.

It was Gharnef who convinced King Jiol to have Gra betray Altea and ally with Dolhr, and as part of his efforts to blackmail Grust's King Ludwik into allying with Dolhr, Gharnef abducted his two children, Jubello and Yuliya, and imprisoned them in a pitch-black room in Khadein. The two would eventually be rescued by Wendell. Following Altea's betrayal and defeat at Menedy River, Gharnef took possession of Falchion to properly safeguard it from being used against Medeus, and he abducted Altea's Princess Elice and took her to his hideout in Thabes, planning to take advantage of her ability to use Aum for an unknown purpose.

Four years into the war, the tides had turned with the rise of Prince Marth of Altea and his united resistance army, the Archanean League. Following the defeat of Gra, Marth travelled to Khadein in search of Falchion, having deduced it to be in Gharnef's possession. Gharnef briefly emerged to attack them, fully aware they were incapable of being a serious threat to him at the time, but eventually he grew bored and left. After this, Marth was tasked by Gotoh with forging Starlight to defeat Gharnef.

In the closing acts of the war, after both Grust and Macedon had been defeated, Marth's army was sent by Gotoh to Thabes, in order to defeat Gharnef, retrieve Falchion, and rescue Elice. With Marth's army now bearing the power of Starlight, the dark protection of Imhullu was pierced and Gharnef was slain.

Despite the death of his physical body at Thabes, Gharnef's soul lived on in the Darksphere, and it was roused by his heretic disciples. Still determined to cause the end of the world, he sought to engineer Medeus' revival for a second time, this time hatching a two-part plan involving using noble-born Clerics as sacrifices. As part of this, Gharnef encountered Eremiya, a bishop in charge of an orphanage who had lost many of her orphans to war, and cast a spell on her to turn her into his minion. Under Gharnef's influence, Eremiya started training orphans to become assassins to serve Gharnef's ends behind the scenes, including an assassination attempt on Marth one year after the end of the War of Shadows.

In order to achieve this plan, Gharnef needed to use Hardin, now the emperor of Archanea. Hardin had since spiralled into a deep depression over his unrequited love for his wife Nyna, and Gharnef seized upon this opportunity and appeared before Hardin, giving him the Darksphere. Hardin's heart was instantly twisted by the Darksphere, turning him into a malevolent conqueror, and he willingly handed Nyna over to Gharnef for use as the first of the sacrifices. In the confusion of Hardin's reign upon the rest of the continent, Gharnef stole Falchion from Altea Castle during its downfall and had Eremiya's assassins capture three more clerics - Maria, Elice and Lena - for use in the rites of Medeus' revival. He also took possession of Starlight, to prevent it from being used against him ever again, but late in the conflict, it was stolen from him by Michalis.

Gharnef's actions directly caused the War of Heroes, pitting Hardin and the Archanean Empire against Marth and the remnants of Altea, which was swiftly conquered by Hardin. Eventually, when Marth returned and slew Hardin, Gharnef and three of his heretic bishops appeared before him disguised as the four clerics. However, the light of the newly-restored Binding Shield repelled him and revealed their true forms, and as he fled to retreat to the Dragon's Table, Gharnef left him with a cryptic warning of Medeus' impending return. Soon after, Marth's army found and defeated Eremiya, and following her defeat, Gharnef appeared before her and revealed how he had brainwashed her into raising assassins, delighting in her anguished screams as she died.

Following Gotoh's counsel, it wasn't long before Marth and his army pursued Gharnef to the Dragon's Table. In the Table's penultimate chamber, Gharnef confronted Marth and warned him that Medeus was now unstoppable and that the clerics' souls had broken to the point of being unsalvageable, engaging him in a battle to kill Marth before he reached Medeus. However, having received Starlight from Michalis, Marth's army prevailed over Gharnef and defeated him again, banishing his spirit once more. He is not known to have resurfaced ever since.

Originally, Gharnef was thoroughly a man of justice and good intentions, despite lacking compassion and love, and was a highly competent student of Gotoh. However, this changed when Gotoh decided to designate Miloah as the successor of Khadein and the Aura tome, due to Gharnef's lack of compassion. Gharnef was twisted by jealousy and rage, which prompted him to steal the Darksphere. The creation of the Imhullu tome sealed his soul in the Darksphere, corrupting him even further into the Dark Pontifex.

From then on, Gharnef was characterized by an almost fanatical devotion to despair and vengeance upon humanity, seeking their end through the revival of Medeus. His preferred method of operation was to remain in the shadows while manipulating other people into his service, such as Jiol, Ludwik, Michalis, and Eremiya; in the latter case, he even threw it in her face as she died and was released from his control. He delighted in the suffering of others, regardless of who they were, and rumors abounded that he had no intention of remaining subservient to Medeus in the long run, plotting instead to slay and usurp him.

Dark Pontifex
A student of Gotoh, the White Sage. Hatched a scheme to revive the Shadow Dragon, Medeus, and rule the world. Appears in Fire Emblem: Mystery of the Emblem.

“Gah! Starlight… Too powerful… I am undone! Know this, young prince… You may have the strength to best me… But Medeus? Ha! I will await you in hell!”
—Gharnef's death quote

“Haha... It’s already too late... This world is done for...”
—Gharnef's death quote in Mystery of the Emblem Book 2

“Agh! What... Where did you get...Starlight...? Still, you are a fool...Your power is not enough to defeat Medeus...I shall be waiting in the pits of the inferno...for when he sends you to join me... Heh heh, ha ha ha!”
—Gharnef's death quote in Shadow Dragon

Gharnef appears in Tokyo Mirage Sessions ♯FE as a major antagonist. His background is largely based on his background in Shadow Dragon and Mystery of the Emblem. After being spurned by his mentor for a rival pupil, Gharnef's jealousy leads him to revive the Shadow Dragon Medeus. In the end, his scheme was thwarted by the Hero-King Marth and his companions. However, rather than die, Gharnef was sealed away.

As time passed and the seal weakened, Gharnef crossed the dimensional barrier, meeting Yatsufusa Hatanaka, with whom he shared a common interest in the resurrection of Medeus. It is revealed that Gharnef was responsible for the Mass Disappearance that kicked off the game's events, and was also the one responsible for erasing the memories of Chrom and his fellow Mirages before enslaving them.

Gharnef's ultimate goal is the completion of the Opera of Shadows, a ritual to resurrect Medeus that requires enormous amounts of Performa. When Itsuki's party learns this, they seek to complete the trials necessary to perform the Opera of Light; a ritual that can counter the Opera of Shadows. Before they can reach the third trial chamber, where the spirit of the Hero-King Marth awaited them, Gharnef and Hatanaka arrive and steal Marth's spirit away. Hatanaka, still seeing Itsuki and his friends as a threat, then offers Gharnef all of his Performa so that the Pontifex can destroy them.

Gharnef's Mirage form in battle takes the physical form of a disembodied bald head within an armored sphere. The sphere is in turn attached to a mechanism that creates a large body with limbs made of energy. He battles Itsuki's party and is defeated, but still manages to send Marth's spirit to Medeus to prevent the Opera of Light from succeeding.

Gharnef is one of three major antagonists from past Fire Emblem titles to appear in Fire Emblem Warriors, alongside Validar and Iago. After being pulled through an Outrealm portal into Aytolis, he becomes allies with Oskar and Velezark, and he takes command of some Gristonne soldiers in their ongoing invasion of Aytolis. He eventually makes his way to the World Tree and blocks the road to the top, intent on stopping the heroes. Defeated, he flees, and with the later defeat of the dragon Velezark, he is returned to Archanea.

Gharnef is illustrated in the trading card game Fire Emblem Cipher with the following cards: 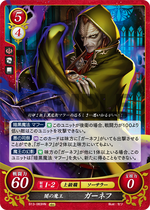