Lion
[view]
“The power of Daein's king has filled me with despair... It is more than I'd imagined... I beg your leave... I must...tell the king...”
—Giffca's retreat quote from Path of Radiance

Giffca is a playable character in Fire Emblem: Path of Radiance and Fire Emblem: Radiant Dawn. He is a very close friend of the Gallian King Caineghis; he is so often in the king's company that he is dubbed the king's shadow. In Radiant Dawn, despite not actually being a Royal Laguz, he has stats equivalent to the Laguz Kings. Also, he gets a Laguz Gem to account for the fact that he does not have the capability to shift forms at will and has initial stats only slightly below Caineghis. Because of his Laguz Gem, he is somewhat like a clone of Caineghis without Formshift.

Accompanying Caineghis since his youth, Giffca is a jet black lion who acts as the king’s advisor. Because of his similar shape to King Caineghis and his dark appearance, he has earned the name “The King’s Shadow” during his time as the king’s personal envoy. To that end, he is nearly equal to Caineghis in every way.

Initially, the king sent Ranulf to monitor the progress of Ike and company; but being that Caineghis could not publicly mobilize, Giffca was sent as his substitute to participate in the Crimean Liberation effort.

After the last battle, as in their youth, Giffca continues to stay at his king's side as his loyal shadow.

Giffca is a man of few words and not much for conversation, but his sharing of joys and sorrows with King Caineghis as his right hand man since childhood have forged them a bond thicker than blood.

Between the three Laguz that can be selected from in the final chapter of Path of Radiance, Giffca has the highest strength, and can inflict noticeably greater damage against enemy Dragon laguz and Ashnard when compared to Tibarn and Naesala. This distinguishes him from them, as he can deal greater damage to these opponents, which tend to be difficult to inflict damage against. In addition, Giffca does not suffer from low stats elsewhere, making his abilities as a raw damage dealer rather consistent. His only considerable disadvantage when compare to other two is that he cannot fly over obstacles.

Giffca joins near the end of the game, with incredible base stats all around. While he is not technically a Laguz Royal, Giffca is more or less statistically equal to Caineghis in base stats and stat caps, as his monstrous Strength and Speed enable him to kill almost every enemy in the game in one round. While he does not possess Formshift, Giffca comes with a Laguz Gem, which allows him to remain permanently transformed all the same. Said item also comes with 5 uses, conveniently when only 5 chapters remain in the game. Giffca will require two points of additional Speed to double Ashera's Aura in Rebirth 5 without Nasir's White Pool buff, however, but this is helped by his decent 50% Speed growth.

Overall, Giffca is an absolute monster of a unit for the small stretch of the game that remains and should be highly considered for deploying in the endgame chapters.

Since their youth, Giffca had been ever at Caineghis's side as his loyal shadow. He died proud of how he spent his life. 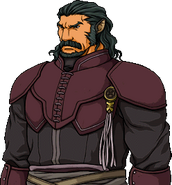 Giffca's portrait in Path of Radiance. 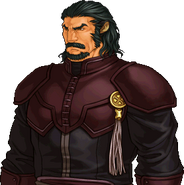 Giffca's battle model as an untransformed Lion in Path of Radiance.

Giffca's battle model as a transformed Lion in Path of Radiance.

Giffca's battle model as an untransformed Lion in Radiant Dawn.