Knight
[view]
“Listen: I'm here by my king's order, and by his order alone. I'm well aware that we have diverse backgrounds and experiences. I don't care who I pair up with. You can't always have your own way. That's just how it works in Frelia.”
—Gilliam talking to Franz in a support conversation.

Gilliam is a playable character in Fire Emblem: The Sacred Stones. He is a quiet, yet dependable, armored knight of Frelia. He joins with Franz to rescue Princess Tana in Chapter 1, and later is appointed by King Hayden to be Eirika's escort along with the priest Moulder and the pegasus knight Vanessa. He is a long-time friend of Moulder and Vanessa's older sister, Syrene.

In his support conversations with Garcia, the two arm wrestle against each other to see which one of them is the strongest. Gilliam loses to Garcia in their first match, but in their second support conversation, Garcia notices that Gilliam fights with his lance in his left hand. They have a second match, this time with their left arms, and Gilliam is victorious, making them evenly matched in strength.

Description: An armored knight of Frelia. He's quiet yet dependable.

* Growths had 5% less in the Japanese version

Gilliam arrives with decent bases for a level 4 knight aside from the typical low speed with growths that resembles Oswin from the previous game. On average, Gilliam will have high or maxed HP, strength, and defense. His speed, luck, and skill growths are highly variable and may be radically different than what may be implied. Gilliam can use killer lances at base, which makes him a formidable tank in the early stages of the game. He is also amazing for defense chapters and tight choke points. Unfortunately, poor mobility undermines Gilliam's pure power, as a faster Paladin can clear the field just as well as he can.

Gilliam's promotion choice is between Great Knight, which offers extra Movement and the various advantages of a mount, and General, which offers slightly better stats and the Great Shield ability. Great Shield is mostly wasted on Gilliam, as his Defense and HP is so high that most attacks fail to faze him anyway, and the skill has a very unreliable activation rate. Unless the player expects to fully max out Gilliam, such as in the Creature Campaign, Great Knight tends to be the better pick, simply because Gilliam appreciates the mobility boost that much.

Silent Gilliam (静かなる重壁 Shizukanaru jū kabe)
"Gilliam returned to his home of Frelia, where he continued to serve the crown as a faithful knight. His imposing countenance was said to strike fear into the hearts of even the most arrogant and brash of Frelia's new recruits."

A Support with Syrene
"Gilliam and Syrene returned to Frelia, where they were married. All agreed they were a perfect match, and their union was blessed by the crown and the order of knights. The two continued their unwavering service together."

“I was prepared for... anything...”
—Gilliam's death quote

“There is nothing to discuss. We will fight.”
—Gilliam speaking to Eirika in Chapter 7

“We can't let our guard down.”
—Final Chapter Quote in The Sacred Stones

Gilliam is illustrated in the trading card game Fire Emblem Cipher with the following cards: 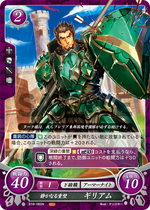 Artwork of Gilliam in Fire Emblem 0 (Cipher) by Cherokee.

Gilliam as a Knight in Fire Emblem 0 (Cipher).

Gilliam's portrait in The Sacred Stones

Gilliam as a Knight

Gilliam as a General with a lance.