Ginnungagap (ギンヌンガガプ Ginnungagapu) is a Tome that is introduced in Fire Emblem Fates. It is a high-level tome that hits the hardest of all tomes and scrolls in the game. However, it has the penalty of halving the user's magic until he/she attacks again. It also suffers from a poor hit rate.

Elise uses the attack in Fire Emblem Warriors in conjunction with various other spells as part of her Pair-Up Musou Attack.

In Norse mythology, Ginnungagap, also known as the "Yawning Void", is the primordial void that is mentioned in the Gylfaginning, the Eddaic text recording Norse cosmogony. Based on the spell's animation alone, it can be deduced that it is specifically modelled after the southern part of the Yawning Void, which is said to be "lighted by those sparks and glowing masses which flew out of Múspellheim". 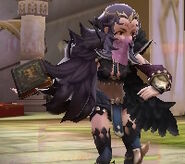 Nyx wielding the tome of Ginnungagap.