Girl of the Spirit Forest

Girl of the Spirit Forest 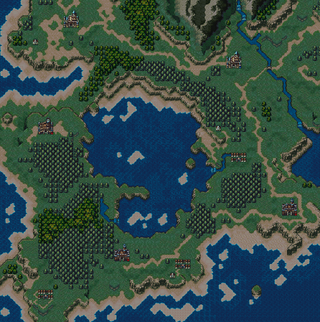 Girl of the Spirit Forest#Objectives

Girl of the Spirit Forest is Chapter 1 of Fire Emblem: Genealogy of the Holy War

If Lex moves to the tip of a peninsula just past the Spirit Forest and he still has an Iron Axe in his inventory, a cutscene involving the Maiden of the Lake occurs, culminating in Lex receiving the Brave Axe.

Edain was nowhere to be found in Evans Castle. She had already been taken deep into Verdane territory. Verdane existed under the cover of a thick forest. In the past, Verdane's frequent encroachment of the border earned them the label of barbarians by the people of Grannvale. Under the reign of King Batu, Verdane witnessed a cessation of all fighting along the border. The amiable monarch succeeded in maintaining the peace with Grannvale, while pacifying his zealous sons.

However, that very peace was ultimately violated by none other than King Batu. The king ordered his three sons to invade Grannvale. There was Cimbaeth of Genoa, the eldest son, Munnir of Marpha, and Jamke, the youngest of the three. Using the forest as cover, the savages awaited Sigurd's arrival. Where had Edain been swept off to? And what incited King Batu to invade Grannvale without warning? Sprawling before Sigurd lay the daunting Great Verdane Forest. He was about to set foot into the forest of spirits...

Having repelled the invading Verdanian forces and captured Evans Castle, Sigurd and his forces prepare for an invasion of Verdane in search of Edain when Lord Eldigan of Nordion visits him and asks Sigurd of his reasons for the invasion. Satisfied with Sigurd's answer, Eldigan warns Sigurd of the plans of the other Agustrian Lords and assures Sigurd that he will be protecting him.

Meanwhile at Genoa Castle, Prince Cimbaeth leads an army to retake Evans Castle and has forced Princess Ayra of Issach to protect his Castle by holding Crown Prince Shannan as a hostage. Elsewhere in Marpha Castle, Prince Jamke releases both the captured Edain and the thief Dew due to disagreeing with his kingdom's invasion of Grannvale and returns back to Verdane Castle in an attempt to convince his father of the folly of his actions.

After defeating the forces of Genoa Castle and killing Cimbaeth, Sigurd learns of Ayra's plight from Shannan and convinces Ayra to stand down and join him as an ally despite the war between Grannvale and Issach.

At the capital of Verdane, Prince Jamke fails to convince his father King Batu due to the influence of his advisor Sandima and is forced to lead an army against Sigurd's forces. King Batu begins to question Sandima's actions but he is mortally wounded by him and Sandima takes over the castle.

As Sigurd's forces pass through the Spirit Forest, Deirdre approaches them again, telling them of Sandima's power and her ability to stop it with a Silence staff, and she and Sigurd confess their mutual attraction. Edain convinces Jamke to ally with Sigurd to put a stop to Sandima. Using Deirdre and her Silence Staff, Sigurd's forces assaults the capital and kills Sandima. Inside, Sigurd finds a dying Batu, who with his last words warns Sigurd of the rise of the Loptr Church and its hold on his and the other nations.

Girl of the Spirit Forest/Script