The Glass Lance (ガラスの槍 Garasu no Yari) is a Lance that first debuts in Fire Emblem: New Mystery of the Emblem. As a weapon that is crafted from the fragile material of glass, the Glass Lance is distinguished by its low Durability. This essentially renders its high Might (comparable to the Silver Lance) rather superfluous, as the lance is incapable of effectively aiding its wielder in fending off enemy sieges before shattering after only three uses. 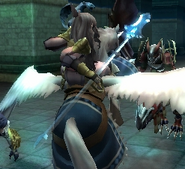