Wyvern Lord
[view]
“His Majesty has never spoken a falsehood in all the time I've served him. And as a servant of the empire, I am duty bound to obey his orders. But I can see no reason to think Princess Eirika's heart is any less gentle now.”
—Glen to Cormag

Glen is a non-playable character in Fire Emblem: The Sacred Stones. Known as the Sunstone, he is one of the Six Imperial Generals of the Grado military. He is also Cormag's older brother.

Glen is playable as a secret character after completing the 5th floor of the Lagdou Ruins, during the Creature Campaign.

Glen was born and raised in southern Grado farmland. As children, Glen and his brother had to chase animals from their fields by throwing sticks and stones at them. This skill came into use one day, when the Emperor's procession decided to pass through Glen's village. Watching the Emperor from the top of the tree, the two boys spotted a dog harrying the procession and drove away the dog by throwing objects at it. Unfortunately, some of the Emperor's guardsmen were also hit by the projectiles and the soldiers decided to arrest the boys. Emperor Vigarde personally chastised the soldiers who arrest Glen, and invited him and his brother to a feast. This feast culminates with the brothers enlisting in the Grado military, and Glen's eventual rise in both rank and fame.

Near the beginning of the game, Glen is given the task of finding Princess Eirika, and thereafter to eliminate her and obtain her bracelet. Upon arriving at Serafew, he tasks captain Saar to apprehend Eirika and eliminating Natasha, a purported traitor to the throne. When Saar accepts with delight, he remarks on the captain's loyalty to the crown and negatively compares it to his questioning loyalty to his Emperor.

Glen reveals to his brother that when Renais and Grado were still close, he had met the Princess once before and found her to be a kind and gentle person. It is this meeting that causes Glen to doubt his Emperor's words that Eirika had killed the citizens in the country of Carcino. The two eventually meet again as Eirika's convoy is passing through Caer Pelyn to enter Jehanna. As they converse, Eirika disproves Vigarde's accusations against her. This frustrates Glen as to wondering why Vigarde lied to him, upon which he decides to let her go until he could get answers from him.

As Eirika leaves, Glen is confronted by General Valter, who reveals that his exile by the Emperor and his hatred for Glen's plea for peace drives him to kill. Glen is slain in the ensuing duel against Valter and his wyvern is likely killed by Valter's lackeys, most likely in an attempt to prevent it from informing Cormag of his treachery and lies to Cormag over his death.

In an unusual oddity, Glen's death is only mentioned in Eirika's route, as his death infuriates Cormag into finding Eirika so he could avenge his brother's death. Upon meeting her in Hamill Canyon, he finds that she was not who he expected and realizes that Valter had lied to him over his death. Should Cormag be sent to fight Valter in Chapter 15, Cormag promises Valter a slow death upon the general's confession that he killed him. In Ephraim's route, Glen's death at Valter's hands is not mentioned at all in the international version; in the Japanese version, Valter does mention his death, but does not directly tell Cormag that he was the one who did so.

In contrast to General Valter, Glen is a compassionate young man, whose honor, integrity, and love for his Emperor ultimately serve as his undoing. Through the course of the game, Glen, along with his younger brother Cormag, become increasingly suspicious of Emperor Vigarde's activities.

Glen is a solid unit despite having only a few levels of growth. His strength and defense are nearly as good as Cormag's, and when equipped with a Killing Edge or Killer Lance (or both) he can defeat almost anything in one hit. He is not at the level of Ismaire in terms of unaided skill, but he definitely comes in handy against things like Cyclops or Baels.

His name is Scottish meaning "narrow valley" which is also derives from the Gaelic name 'Gleann' meaning "mountain valley".

Glen as he appears in The Sacred Stones comic.

Glen's portrait in The Sacred Stones 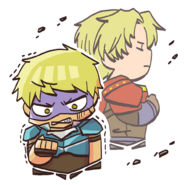