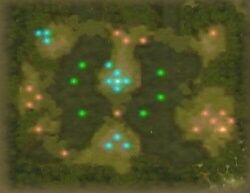 Chapter script
[view]
“Laguz warriors led by Tormod join the escaped prisoners, and Daein's army grows ever larger. Its victories at Talrega and other key locations have strengthened its position. The army rides across the land, liberating prisoners from Begnion encampments. The Daein ranks swell with the influx of veteran soldiers, and the men begin to dream of the day when they may retake the capital. Like a fever, conflict grips the nation. The night will be long before this fever breaks. All eyes turn toward Daein's capital as the liberation begins what all believe will be a long and bloody march.”
—Opening Narration

These coordinates are based on the top-right corner of the map and moving the cursor the indicated number of squares.

Then from the bottom-left corner of the map

Buy some Olivi Grass for Vika and give Tormod an Elthunder/Thunder tome before starting the battle. The Wyrmslayer is also another option.

On turn two make sure you kill the Wyvern Rider - use Tormod's (el)fire, and shove him if necessary. Have Vika move to protect the rest of the civilians from the bandit(s) by rescuing them and dumping them on the middle island if necessary. Send Sothe or Volug to help if you have the spare manpower. Leave Tormod and Muarim where they are to fend off attacks in the south but keep an eye on their health, especially as Tormod relies on evasion to survive physical attacks.

Send Volug and Rafiel to the east to join up with Micaiah - Nailah is more than capable of tearing through the enemies on the left - and work your way clockwise around the north-east of the map. The boss and the enemies around him will move when you get into range so use this to your advantage and position ranged attackers in the thicket for the added def/avoid. If all goes to plan, the enemy should be routed before reinforcement Wyverns arrive.

If you wish to priest and dodge abuse during this chapter, then kill everyone except for the healer and the boss. Then shove the healer away from the boss and trap him there by surrounding him with your units. After that have your units continue to attack the priest, but do not kill him, just make sure that the healer heals him/herself first, to the point where you can attack him/her. If one of your units can double attack the healer, then have that unit rescue another unit. This will reduce the unit's skill and speed, making him/her unable to double attack. Repeat this process until you run out of weak weapons, or if your units can kill the healers in one hit even when they have someone rescued, and once all of your units are able to kill the healer in one hit, then just put the healer out of his/her misery. As for the boss, have someone stand in front of him, and have him constantly hit that unit, if your unit gets hit, then heal him/her with Laura, but be careful the boss has a chance of scoring a critical, so save before he attacks. When the boss runs out of weapon uses, finish him off.