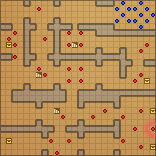 Chapter script
[view]
“The group grows distrustful of Anthony after he seemed to lead them into a trap. Nevertheless, they travel deeper into Valla, seeking the castle's back entrance.”
—Opening Narration

Going Forward (進むべき道 Susumubeki michi The Way Forward in the Japanese Version) is Chapter 21 of Fire Emblem Fates in the Revelation Version. This chapter takes place in Cursed Ruins.

The difference between unpromoted and promoted on this map lies in their stats and ability to use weapons. For instance, an Onmyoji in the red room southwest of the starting point will have a rod he will be unable to use if he moves into the blue room north of his starting point and becomes a Diviner. Maids will also be dropped down to Troubadours and be unable to attack completely. Stats will also differ depending on the class. While a Dark Mage will have a stat spread (HP/STR/MAG/SKL/SPD/LUK/DEF/RES) of 35/00/24/11/14/5/14/20, a Sorcerer will have a spread of 38/00/29/12/17/5/16/23. Note that when going from unpromoted to promoted, the unit will not recover the HP that is gained.

This map has 5 chests but only 2 Chest Keys to use, so you will want to bring a unit with Locktouch.

The goal of the map is to kill Anthony, who is completely unaffected by the red and blue tiles, so his stats can only drop from Shurikens/Knives and specific skills or weapons. If he manages to get a hit in on you, the unit will be immobilized, so try to pick him off from a distance. Because of higher than usual Defense/Resistance and HP stats, you will probably not get him down in one round even if you double, but he is susceptible to the Blessed weapons so consider bring one or two of those. Alternatively, just hitting him from range will be enough to defeat him.

The Dragon Vein makes an appearance in this chapter, swapping the colors of the rooms. This is useful enough to lure enemy units into being unpromoted, but the accessibility of the vein is limited and will more than likely force the royal sibling of your choice to remain behind.

Reinforcements will begin to appear on the stairs after about 5-6 turns, starting with a Swordmaster coming from the stairs in the red room southwest of the starting point.