Chapter 10A: The Resistance Forces/Chapter 10B: Caught in the Middle

Jarred Kjack
[view]
“But...I ugly... I not be with people. People hate me...”
—Gonzalez in a support conversation with Echidna

Gonzalez is a playable character in Fire Emblem: The Binding Blade and the only playable Brigand in the game.

Hailing from the Western Isles, Gonzalez was rejected by his fellow villagers due to his monster-like appearance, and was reluctantly reduced to a bandit and used as a tool for hard labour by them. Ordered to destroy a village, he switches sides when Lilina speaks to him, because she's the first person to speak to him kindly.

At the end of the war, he returns to his village. Rather than the heavy rejection he received from them earlier, he is accepted as a war hero and finally lives a happy life in the village.

Unattractive in physical appearance, even by his own admission, Gonzalez possesses a heart of gold that contrasts with his appearance. Despite his mistreatment, he bears no ill will towards the villagers of his hometown but feels that he is unworthy of even basic kind treatment. He is touched by Lilina's honest kindness given to him upon their first meeting and weeps when she insists on staying with him in their support.

He is unintelligent and simple, his support conversations are often short with him unable to use even simple phrases like "thank you" or forgetting the name of the person he is talking to between conversations. He is well aware of his lacking intelligence and even wallows in self-pity over his shortcomings. However he is receptive of others and finds inspiration through their patience to improve himself, even if only by a tiny amount.

Description: A brigand from the Western Isles. Uneducated but compassionate.

Gonzalez, depending on the route, joins at either Level 5 or Level 11. In Larum's route, he joins at level 5 with a C in axes and in Elffin's route D in axes. He gets hard mode bonuses, a nice touch, and his starting stats are the same regardless. This means if one wants to maximize the amount of stat gains he'll get, especially if the goal is to level him to level 20 before promoting him, Larum's route is ideal, especially given the better axe rank, but if one desperately needs a Berserker and intends to promote him with the next hero crest obtained, Elffin's route is ideal. It depends on the player's preference in the end.

As a unit, Gonzalez has monstrous damage output. His Strength and Speed growths are phenomenal, but his skill is terrible and when combined with the low accuracy of axes in FE6, his accuracy is poor. His HP is very high as well, and his Constitution is so high that Steel Axes don't slow him down, even before promotion. His Luck and Defense are average, but his resistance is very low. This means his HP allows him to soak up most physical hits, but magic does a number on him. That said, his high Constitution can also be something of a bane; he is so heavy that many units cannot carry him at all, and after promotion, Sin is the sole promoted mounted unit who can carry him. One particular advantage Gonzalez has is his ability to cross very rough terrain and climb mountains, which can enable some unusual strategies: for instance, using the massive Avoid boost to battle Chapter 21's wyvern swarms.

Promotion grants him a huge Skill boost (+5) and Crit +30, meaning with the right supports his hit rate can improve further and his critical rate can skyrocket. Regardless, he tends to struggle with fast sword users in terms of hit rate. His HP, Strength, Speed, and Defense also improve nicely, but he gains no resistance. If one intends to get him to Level 20 before promoting him, later obtained Hero Crests can be used on him if the player would rather promote characters like Dieck or Rutger with the earlier obtained ones. Overall, Gonzalez has good chances of being a very useful unit, especially on hard mode, but does have his weaknesses.

Kindly Bandit
An uncommonly large man, born in the Western Isles. Searching for a group who would accept him for who he is, he wound up with bandits. Appears in Fire Emblem: The Binding Blade.

Gonzalez - Gentle Bandit (心やさしき山賊 Kokoro yasashiki sanzoku)
"When Gonzalez returned to his home on the Western Isles, he was not greeted with stones or harsh words. Instead, people cheered for the return of a hero."

He makes a brief cameo appearance in Chapter 17 of the Hasha no Tsurugi manga.

Gonzalez is illustrated in the trading card game Fire Emblem Cipher with the following cards: 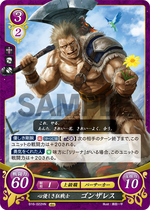 Gonzalez is a common spanish surname, that has ancient germanic origins, derived from the element "gundislav" or "Gunther-salaz", meaning "Battle elf" or "War Hall".