Chapter 15: An Oasis of Magic (Shadow Dragon and the Blade of Light)

Final Chapter: Chosen by Fate (Shadow Dragon and the Blade of Light)

[view]
“Some have used that name, yes. You must listen to me. As you suspect, Gharnef has made off with Falchion. With Imhullu and Falchion in the sorcerer's grasp, Dolhr now must think twice before challenging him. Gharnef knows this. And one day, he plans to conquer Dolhr and rule the entire world.”
—Gotoh to Marth in the end of Chapter 15 of Shadow Dragon

Gotoh is a playable character from Fire Emblem: Shadow Dragon and the Blade of Light and its remake. He is a member of the Divine Dragon Tribe and a bishop of great renown who is known as the White Sage.

Gotoh is one of the few Divine Dragons who survived the war against the Earth Dragons and lost the ability to transform into a dragon after discarding his Dragonstone. After Naga's death, Gotoh was commanded to guard humanity. When Medeus and Dolhr began their war against humanity, Gotoh led Anri to the Ice Dragon Temple, where Anri claimed the Falchion that was later used to defeat Medeus. Eventually, he founded the nation of Khadein and trained two pupils, Miloah and Gharnef, both of whom strove for justice. He chose Miloah to be his successor and gave the Aura spell to him because he had more empathy and compassion than Gharnef. Out of jealousy, Gharnef stole the Darksphere and used it to create the Imhullu tome, which resulted in his soul being twisted.

Ever since that incident, Gotoh has been observing Gharnef's actions, hoping that someone would eventually stop him. When Marth proves to be the person to do it, Gotoh begins assisting him in his quest by giving out advice. Late in the game, Gotoh points out Michalis's foolish behavior during their conversation. He also creates the Starlight tome, which is required to break through the barrier of Imhullu, by using the Lightsphere and the Starsphere that Marth brings to him.

In Fire Emblem: Mystery of the Emblem and its remake, Gotoh continues to serve the role of an advisor to Marth, although he never becomes playable. He gives the Lightsphere to Marth as well as the Starsphere if all twelve of its shards have been collected. He also allows Tiki to leave the Ice Dragon Temple with Marth in this scenario, but he forces her to continue sleeping otherwise. This is to prevent her from becoming feral.

Gotoh is an excellent unit for his brief period of availability. He can wield any tome or any staff, his mixture of healing and 1-2 ranged damage is solid, and his stats are very high, including his capped Skill and Speed making him accurate and hard-hitting, and his high HP and Defense making him as durable as a General. He even has capped Resistance with no investment, something practically no other character can boast barring Medeus. His base inventory is sufficient to carry him for the entire final chapter (including the game's only usable Swarm tome). Gotoh's only weaknesses are that he cannot make use of Secret Shop statboosters, which means other units can surpass him, and as a magic unit, he cannot damage Medeus, though his ability to use Warp and Fortify can easily aid Marth in bringing the dragon down.

Like many later prepromotes in Shadow Dragon, Gotoh suffers due to enemy strength increasing exponentially on higher difficulties, and as a character who joins in the last chapter, he is forced to battle the strongest enemies of all. On Merciless Mode, most common enemies wield forged Brave weapons, which, needless to say, Gotoh does not survive well against, though he can at least chip them fairly effectively. Stat caps have also been raised, meaning Gotoh's 20 Speed and Skill is no longer the feat it once was, and other characters are likely to surpass him by the endgame. Lastly, Medeus himself can kill Gotoh very, very easily, and while this is not unique to Gotoh, it is small comfort when the player desperately needs someone capable of killing the earth dragon.

Due to this, it is generally best to focus on Gotoh's status as an A-rank staff-user with very high base Magic. The most obvious use of this is Warp, since any kind of quick clear on any difficulty will require a minimum of two Warps (one to eliminate Medeus's bodyguard, one to kill Medeus himself), and more likely three or four, as Medeus does not go down easily. On non-warpskip playthroughs, his ability to heal his divided allies en masse with Fortify and chip enemies with his Swarm tome are both helpful. His utility and his class's natural parameters will make him handy to most players. However, if the player does not possess Tiki, it is strongly advised that the player seek Nagi instead of him, since without Nagi, Tiki is the only unit who can do significant damage to Merciless Mode Medeus.

Gotoh is illustrated in the trading card game Fire Emblem Cipher with the following cards: 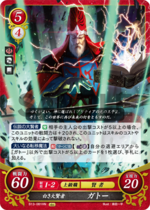