Gra (グラ Gura) is a country on the continent of Archanea in the games Shadow Dragon and the Blade of Light, Mystery of the Emblem, and Shadow Dragon. It is located on an island which is directly east of Altea. After the death of Anri the kingdom split due to the issue of inheritance, as Anri left no heir. A faction opposed to Marcelus formed an independent kingdom, convincing much of Altea's population to join them. Despite this, Gra retained close bonds with Altea and were allies in all conflicts.

In Fire Emblem: Shadow Dragon and the Blade of Light, Gra under the leadership of their current King, Jiol betrayed Altea to Dolhr, and attacked them from the rear causing the death of King Cornelius. This betrayal shocked many of Gra's citizenry, but they were forced to comply due to occupation armies. During the war, Gra was the weakest of Dolhr's allies, and was lent only token support. Their capital was eventaully stormed, and King Jiol was slain.

Gra was left in ruins after the War of Shadows but during the War of Heroes they received support from Emperor Hardin of the Archanean empire in exchange for their loyalty and Jiol's daughter Sheena was put in power. Sheena was popular among the people and the youths from the previous war were excited at chance of revenge on Altea who they now viewed as their bitter enemies. However the inexperienced young soldiers were used as expendable pawns by their Archanean allies and most ran at the sight of Marth's powerful army.

If Marth does not attack the fleeing Gra soldiers, he is able to make up with Sheena and Gra, Marth promising to help restore Gra. Provided this conversation happened, at the end of the game Sheena will entrust Marth with Gra knowing that he will treat its citizens as if they were his own.

Gra would eventually beome part of the Theocracy of Plegia, along with Altea, Doluna, Grust, and Macedon. 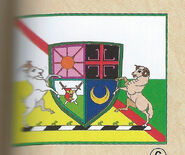