Chapter script
[view]
“Marth once again departed from Altea, heading towards the capital of Akania. However, the King of Gra, ally to Archanea, stood in their path. Gra allied with Dolhr in the previous war; King Jiol fell in battle, and the kingdom was lost. Gra was annexed to Akaneia at one point, but, by Emperor Hardin’s order, it was returned to Akaneia. Hardin found King Jiol’s daughter, Princess Sheena, and allowed her to take the throne, providing support to Gra. Sheena received fanatical support from her people. To them, Sheena was their only hope. The youths volunteered to become soldiers one after the other. And then, happily moved out to exact revenge on Altea, their bitter enemy. However, their dreams were shattered… Before the fast approaching Altean elites, the Gra soldiers lost the will to fight and started fleeing for their lives.”
—Opening Narration, New Mystery of the Emblem
“Marth and the others once again moved out from Altea, and headed towards the imperial capital of Pales. But, along their way, they passed through the Kingdom of Gra, a land allied to Akaneia. In the previous war Gra sided with the Doluna Empire, which resulted in their king, Jiol, dying in battle and the destruction of the kingdom. The country was once a part of Altea, but they sided with Akaneia after listening to Hardin’s orders. Hardin found King Jiol's daughter, Princess Sheena, and allowed her to ascend the throne, and he then ordered reinforcements from Gra. Sheena received wild support from the citizens of Gra. To them, Sheena was their only hope. The youths all volunteered to become soldiers. They were happy to move out and have the chance to defeat their bitter enemy, Altea. But their dreams were shattered in an instant... Before the fast approaching Altean elites, Gra’s soldiers lost all morale, and fled for their lives.”
—Opening Narration, Mystery of the Emblem

Gra's Setting Sun is Chapter 17 of Fire Emblem: Mystery of the Emblem and its remake.

This chapter is not hard at all, and you also get two new characters (three in the remake), Sheena and Samson. Sheena has low base stats. It is best to train her in Chapter 18 or at the very least forge a weapon with high Might. You also get Tomas in New Mystery of The Emblem, who, like Sheena, has bad base stats but excellent growth rates.

Only kill the Archanea units and leave the Gra units alive until after you recruit Sheena; one of the villager in the north-eastern houses tips you off that the Gra soldiers have no will to fight. You can tell the units apart by the weapons they carry, their stats, and of course, their names. Archanea units carry Silver weapons as opposed to the Iron weapons of the Gra units, who are as weak as the enemies at the very beginning of the game.

Gra units also are not aggressive and will not initiate an attack.

Once you have recruited Sheena to the team, give her the Starsphere that was obtained from Chapter 14 to increase her growth rates even further by allowing her to kill off the Gra units. By doing this, Sheena will level up at least once or twice before the next chapter. This option is no longer possible in the remake, as killing Gra soldiers after Sheena's recruitment in that game will make her and Samson rejoin the enemy. If either of them are holding the Lightsphere while doing this, it is lost forever and defeating Chapter 20's boss will be impossible without restarting this chapter. 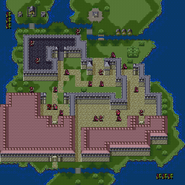