Gradivus (グラディウス Guradiusu, translated as Gladius in the Japanese versions and Gradius in the fan translations) is a legendary Lance that appears in the Archanea Series of the Fire Emblem franchise and Fire Emblem Awakening.

One of three regalia weapons of Archanea, Gradivus serves as the counterpart to the sword Mercurius and the bow Parthia. Taking its roots from obscure origin, this lance was stolen by Adrah, where it played a crucial role in his conquering the continent of Archanea. Upon founding the Kingdom of Archanea, Gradivus was dubbed a Regalia and subsequently passed down through succeeding generations of Archanean royalty.

During the War of Shadows, Gradivus is stolen by the Dolhr and Grust armies following their conquest of the Archanean palace. It was given to the Grustian general Camus and was made his weapon of choice. Although brimming with confidence in Gradivus's ability to lead him to victory in Chapter 20, Camus is eventually defeated, and possession of the lance is eventually ceded over to Marth's army.

Gradivus also appears in Chapter 5 of Fire Emblem Gaiden and Fire Emblem Echoes: Shadows of Valentia, where it is acquired from a Chest without fanfare, though the Valentia Accordion artbook reveals that the lance ended up in Valentia during the events of Gaiden but returned to Archanea at the same time as the Whitewings.

During the ensuing War of Heroes, the newly-coronated Emperor Hardin inherits Gradivus and wields it as his weapon of choice until his death in Chapter 20, where it again is passed to Marth's army.

“A lance wielded by a brave defender of Fódlan's Throat boasting high hit rate and might.”
—In-game description, Three Houses

The name for Gradivus comes from Mars Gradivus, which was one of many titles accorded to the Roman god of war, Mars. Temples constructed in his honour were once the converging points where Roman troops gathered to rally during the moments preceding any imminent battle.

The title of Gradivus also derived from the Latin word gradus, meaning "to walk, step, or march."

Gradivus, as it appears in the fifth series of the TCG.

Camus wielding Gradivus in the Promotional series of the TCG. 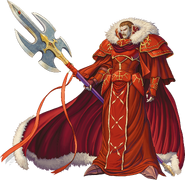 Official artwork of Hardin wielding Gradivus from New Mystery of the Emblem.

Official artwork from the Archanea Chronicle Memorial Book, where Gradivus and Nyna are depicted to be the principal causes of the tension brewing between Hardin and Camus. 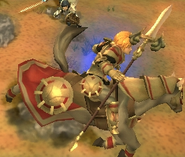 Sprite of the Moon Gradivus from Heroes.