The Grandmaster is a combat physical and magical class that is first introduced in Fire Emblem Awakening. The promoted form of the Tactician class, Grandmasters retain the ability to wield both Swords and Tomes as their primary weapons of choice. They are said to be tacticians gifted with the exceptional commanding ability and pivotal units in any army.

In Fates, the Grandmaster class is DLC-exclusive and is the base class of the Amiibo version of Robin. The Fell Brand is required for any ordinary male unit to class change into this class, and which can be obtained through every completion of the Hidden Truths 1 DLC episode.

In Awakening, the Grandmaster class shares the same balanced base stats in all stats as its predecessor, but now with about 20 extra points to the caps. The class is thus considered to be versatile, able to fulfill both combat and support roles alike without much penalty. However, because of its balanced stats, the class thence does not have a definitive role, as most other classes have at least one defining trait that clearly highlights specific roles that they are specifically designed to fill. Given that Grandmasters promote from the class that learns the Veteran skill, Grandmasters thus have little trouble leveling up so long as they remain in a Pair Up.

Like their pre-promotion, Grandmasters wield both Swords and Tomes offensively, allowing them to attack enemies with the weapon type that can exploit their lowest defensive stats. Building off of their balanced and relatively average Attack and Magic, their signature attack skill Ignis can inflict massive damage against enemies. Their second skill, Rally Spectrum, is one of two Rally Skills which increases multiple stats to those in range and is a great choice against difficult enemies.

In Fates, the Grandmaster class returns as the base class of Robin. Unlike the Awakening version which has balanced stat caps across the board, Fates' version of the Grandmaster class favors magical stats, boasting decently high Magic, Skill and Resistance caps. Their Speed, Luck, and Defense are correspondingly slightly lower to reinforce the fact they are magic-oriented. In addition to this, Grandmasters are only able to achieve a B rank in Sword mastery, as opposed to being able to attain an A rank in Tome mastery.

Running with that trend, the Fire Emblem Warriors version of this class can only use Tomes.

The name for the Grandmaster class may be derived from the title "Grandmaster", one that is awarded to world-class chess masters.

Concept artwork of a male Grandmaster.

Concept artwork of a female Grandmaster.

Brady as a Grandmaster in Awakening. 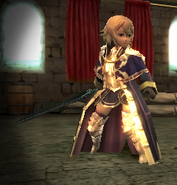 Female Morgan as a Grandmaster in Awakening.

Map sprite of the male Robin as a Grandmaster in Awakening.

Map sprite of the female Robin as a Grandmaster in Awakening.