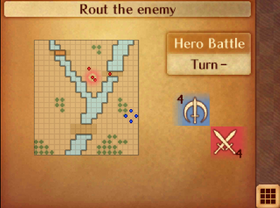 Chapter script
[view]
“Robin, a traveler from another world, has called Avatar to meet him in battle. He wants to know who is the better tactician!”
—Introductory blurb.

After visiting Corrin's My Castle three times, Robin wishes to test Corrin's prowess in battle. The brilliant amnesiac Tactician from Ylisse, Robin is ready for a battle of the wits!

Although this battle can be accessed fairly early on, one will find it extremely difficult to clear. Of note is the Great Knight standing on the bridge. In most cases they will hold the bridge, forcing you to get past them first. In addition to that, the enemy Shrine Maiden has a Hexing Rod, which will halve the HP of one of your units, which will make it extremely difficult or close to impossible to take on the Great Knight at low levels.