Grannvale (グランドベル Gurandoberu lit. Kingdom of Grandbell in the Japanese version) is a kingdom of Jugdral, founded in the center of the continent. The Fire Emblem does not appear in Fire Emblem: Genealogy of the Holy War, but it is mentioned as the family crest of the Velthomer house by the person succeeding it.

Grannvale is bordered by Agustria to the northwest, Verdane to the southwest, Miletos to the south, the Munster District to the east and the Aed Desert to the northeast.

Founded by Saint Heim during the Gran Calendar Year 649 with over half of the Twelve Crusaders (Heim, Fjalar, Baldr, Bragi, Thrud, Ullr and Nál) founding its six duchies, their descendants continued to rule over the following centuries.

During the time of the First Generation of Genealogy of the Holy War, Grannvale started a war against Isaach in retaliation for a perceived assault by the nation upon the sacred site of Dahna. Subduing and annexing the Kingdom of Verdane in 757, as well as the country of Isaach and the Dominion of Agustria in 759, Grannvale ultimately won the war, but the internal strife between Sigurd of Chalphy and dukes Reptor and Langobalt led to crown prince Kurth being assassinated.

Sigurd being framed for the crime, he led his army to Belhalla in order to attend a royal procession, where Lord Arvis of Velthomer instead sentenced him and his entire army to death for their crimes of treason. Trapped in by the surrounding army, Sigurd's forces had nowhere to go, leading to the one-sided rout known as the Battle of Belhalla, where his army was quickly overwhelmed and wiped out, and Sigurd was personally killed by Arvis with a blast of Valflame.

With the throne of Grannvale succeeded by Arvis following the death of King Azmur and the marriage to his granddaughter Deirdre, the territories subdued by Sigurd were claimed as territories of Grannvale, as was Isaach in the war's aftermath. It also invades the Thracian Peninsula, and annexes the northern half, with Miletos and Silesse soon conquered by Grannvale as well. Having the continent unified under his leadership, Arvis reformed Grannvale into an empire with himself as its first emperor, by popular demand of the populace, and for a time the Empire was a benevolent and peaceful, albeit constraining, nation.

Such rule experienced a significant shift after this however, when the Dark Dragon God Loptous descends into Prince Julius when he is given the tome of Loptous by Manfroy, instantly corrupting him. Killing Empress Deirdre, Julius quickly wrested control of Grannvale from Arvis, rendering him a mostly powerless figurehead as he twisted the empire into a totalitarian regime and granted the Loptrians positions of power across the continent. After this, Child Hunts start to occur and the Grannvale Empire becomes extremely totalitarian. Meanwhile, Oifey and Shannan had been organizing a liberation army between Chapter 5 and 6 with the purpose of overthrowing the empire.

Seventeen years after the Battle of Belhalla, the second generation of Genealogy of the Holy War begins, and the liberation army led by Seliph begins to liberate Jugdral. The first country to become liberated is the country of Isaach, in Chapter 6. In Chapter 7 and 8, the Munster District is liberated. In Chapter 9, the Kingdom of Thracia is overthrown for continuing to ally with the Grannvale Empire, while in Chapter 10, the country of Miletos is liberated. At the beginning of the Final Chapter, the people of Agustria and Silesse start to fight against the Grannvale Empire, and civil war starts in both. During the Final Chapter, the presently totalitarian country of Grannvale is overthrown and Seliph becomes the king of Grannvale. Also, members of the liberation army move into Agustria and Silesse to fully defeat the remnants of the Loptr Church. Seliph reformed Grannvale back into a kingdom and liberated those countries.

Grannvale is composed by the the spanish words Gran and Valle, in english meaning "grand valley". The Japanese version is formed by the junction of the words Grand and Bell.

A Grannvale Campaign General, as depicted in the TCG. 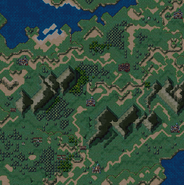