Darros (Enemy, talk with Marth, exclusive in New Mystery of the Emblem)

Chapter script
[view]
“Marth and his friends follow Xane, marching towards the northern lands. Before their eyes are walls of towering mountains, sheer cliffs, and deep valleys… After passing countless mountains, they are assaulted by scorching heat. Magma flowing like a river and rumbling like thunder blocks their way. Truly a dreadful scene, as if straight out of a nightmare.”
—Opening Narration, New Mystery of the Emblem
“Marth followed Xane and continued heading directly north. There he faced walls of towering mountains... As well as sheer cliffs and deep valleys... Then, after passing countless mountains... Suddenly, a scorching heat surrounds everyone. Magma flowing like rivers, and sounds of roaring, block their passage. This is truly a fearful sight.”
—Opening Narration, Mystery of the Emblem

Graveyard of Fire Dragons is Chapter 12 of Fire Emblem: Mystery of the Emblem and its remake.

The chapter is located in the Flame Barrel. One of the Fire Dragons from the north-eastern fortress carries the Pisces Starsphere Shard.

Lure out the first few enemies out, then position the whole army at the back of the starting area with forts. Block the entrance with a Knight and heal him up with a staff user behind, preferably Etzel. While the Knight slowly damages the Fire Dragons, have a flier unit or two fly out from the back, attacking the Barbarian and, if possible, the other Fire Dragon. Slowly advances forward after killing all enemies, including the reinforcements from the forts at the back. For further strategy, lure the dragons out, one by one, with a knight or Minerva, then gang up and kill them. Repeat this process until you reach the boss. Since it is a Fire Dragon, slay it down with a Wyrmslayer or Dragonpike. 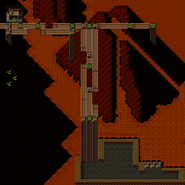