Max Mittelman
[view]
“Honestly, I really don’t care one way or another about the kingdom. I don’t have the kind of direction you do. It’s more like I just have a nagging desire to do SOMETHING. So I thought if I joined the Deliverance, I might figure out what that is.”
—Gray talking to Alm in Fire Emblem Echoes: Shadows of Valentia.

Gray is a playable character from Fire Emblem Gaiden and its remake, Fire Emblem Echoes: Shadows of Valentia. He is 18 years old.

A Villager from Ram Village and one of Alm's childhood friends, Gray joined the liberation effort after Lukas explained that General Desaix had taken over Zofia Castle. He is the son of a merchant family, and never thought he would get to leave Ram Village growing up.

After the war, Gray marries the pegasus knight Clair. His best friend Tobin also has a crush on Clair, but in their supports they agree that even if they feel the same for her, these feelings will not get in the way of their friendship.

If Tobin dies in the game, Gray falls into despair and alcoholic depression, only recovering due to the support and assistance of Clair; the two then have a son named Tobin, after his late friend, in this scenario.

If Clair is the one who dies in game, no matter whether Tobin survives or not, a very depressed Gray leaves Ram Villages and is never seen again, despite his worried friends' attempts to find him. Perhaps he committed suicide, but nothing is confirmed about this scenario.

Gray has an easygoing, chatty, and sometimes aloof personality. He comes from a merchant family and therefore is knowledgeable of the world outside of Ram. He does not have much self-awareness, however, often barging into conversations and being unconscious of how his own words come off to other people. Gray asserts himself as the tacit "leader" of the villagers and is very confident in his abilities. In battle, he adopts a gung-ho personality which is evident in his quotes and animations. Gray has also been shown to non-maliciously make fun of Alm at times.

In Act 1, talk to him in Ram Village (needed to progress).

Out of the three starting villagers in Alm's team, Gray's joins with the highest starting stats and level, and is the only one of them who requires no leveling in order to class change at the first available shrine. Statistically, he has the highest strength growth of the villagers, along with good HP, skill, and defense growths, but mediocre speed and very low luck. His very bulky stat growths best fit him into the mercenary class, as the high speed bases of the classline invalidate his low speed growth and immensely increase his resistance, which allows him to exploit his high strength and good defenses well, making him a very well rounded unit with few notable weaknesses. However, unlike the other villagers, he is the least flexible of all of them, and he does not work particularly well in any of the other available classes, making his use fairly restrictive.

* DLC classes, visit Shrine to access.
** Possible to loop back to Villager.

In Shadows of Valentia, Gray once again has the highest joining stats and level of the four starting villagers, and is the only who does not need to gain any level ups at all in order to class change at the first available shrine. Statistically he once again has the highest HP and attack growth out of all of Alm's early joining villagers, with average stats everywhere else. Much like in Gaiden, his emphasis on bulky stats suits him best in the mercenary classline, as the high speed bases of the classline fix his middling speed while allowing him to use his above average attack to his fullest, and the Apotrope skill of the Dread Fighter class fixes his middling resistance, once again making him an extremely powerful unit with very few overall weaknesses. While he can function in almost any class the player puts him in thanks to his attack, none of them work as well for him as mercenary thanks to his lower combined base speed and growth, and he is the least flexible of all the early joining villagers.

Gray is another Sword Infantry unit hailing from Ram Village and, much like other trainee units of Heroes, he has a better BST than most other infantry units. Gray suffers from average syndrome with well distributed stats, having decent Atk, middling Spd and Def, and low Res. He can be built in a variety of ways, but his highest potential comes from defensive builds, especially when built to take on physical units. This does require a high level of investment, but he can perform the role with competence.

Gray’s Zanbato deals effective damage against Cavalry units and is the sole unit to carry the weapon since his introduction. While the Cavalry meta has declined with time, Gray still can prove to be an effective check with this weapon against units like Brave Lyn and Hrid. This is especially so when it is refined to negate visible buffs on cavalry units, making him an even harder check.

Swap allows Gray to swap places with an ally, moving them out of danger or positioning himself or his ally to bait another unit. Wind Boost boosts his Speed by 6 if he has at least 3 more HP than his opponent, His reasonable HP does allow this to be used over a handful of units, there are also many who are completely unaffected by it. Sword Valor boost the SP gains of sword allies by 2 if he is active on the field with it, giving him viability when training other units, though this is shared with Exalt Chrom and most importantly Lene who carries the skill and is a Dancer, which is more useful when training.

Gray is easily walled off by bulky blue units like Fallen Hardin, Nephenee, and Epharaim. Reinhardt, Delthea, and Ophelia are common mages that tear through his low magical bulk with ease. Most Firesweep units, such as Cordelia and Tana, can double him with ease and prevent him from counterattacking. Even Bridal Cordelia and Brave Lyn with Firesweep Bows can punch through his bulk especially when built to maximize offense and speed up their cooldowns.

Gray’s options are generally geared to be defensive so defensive options include Slaying Edges for accelerated cooldowns or an Armorsmasher to combat the armor meta. Reposition is a good positioning skill for his Support Skill while Bonfire uses his Def to give his damage a good boost when it activates. Steady Breath accelerates his cooldowns while boosting his Def, though Steady Stance is a budget option. Quick Riposte patches his low Spd and guarantees a follow-up when attacked above 70% HP while Guard slows the enemy special charge. Skill C has plenty of options from ally boosting skills like Hone Attack, but Attack Smoke boosts his tankiness, decreasing his enemy’s Atk by 7 if they are within two tiles of him while Defense Smoke decreases enemy Def so he can hit harder against bulkier units. Ultimately, his Skill C choices come down to preference.

(If both Tobin and Clair are alive)
"He fought with Tobin over Clair, and won her heart splendidly. 'For a man, it's not the face that matters, but the heart!' Or so he declared."

(If Tobin is dead)
"Due to his grief over Tobin's death in battle, he drowns himself in alcohol every day. When will a smile ever return to his face...?"

(If Clair is dead)
"Having lost the one he loved, never to meet her again, he set off on a journey by himself."

(If both Tobin and Clair are alive)
As a member of the One Kingdom's Brotherhood of Knights, Gray worked diligently at restoring the continent. He applied himself equally to winning Clair's heart, and beat Tobin out in the end. As he was heard to say, "Pick the guy with the big heart, not the pretty face."

(If Clair is alive but Tobin is dead)
Devastated by Tobin's death, Gray was nearly lost to the demon drink until Clair convinced him to clean up. After declining knighthoods in the One Kingdom, the two married and lived out quiet lives. Gray was especially fond of his son, whom he named after his friend.

(If Clair is dead)
Having lost the woman he loved, Gray surprised even himself by embracing the life of a vagabond and setting off for parts unknown. His friends spared no effort in attempting to track him down, but it was to no avail.

Gray is illustrated in the trading card game Fire Emblem Cipher with the following cards: 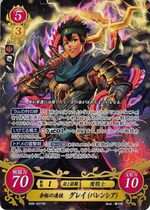 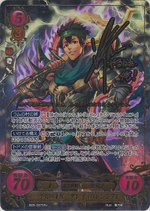 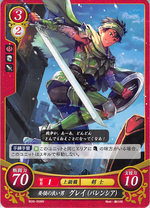 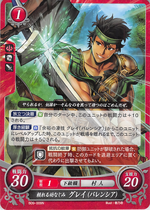