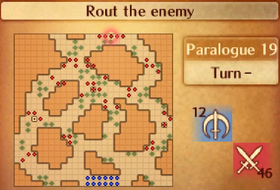 This paralogue is unlocked once Arthur has obtained an S-Support with a female character.

This map features Dragon Veins that cause all trees within a three-tile zone around the Vein to bloom. If any enemy unit is within the three-tile zone, they will retreat from battle and will give the player 500 gold for each unit that retreats in this manner.

This map features numerous Dragon Veins. However, rather than manipulating the terrain for a tactical advantage, the Dragon Veins here causes trees within a three tile radius of each Vein to bloom. If there are any enemy units when this occurs, they will retreat from battle and will net the player 500 gold per unit that retreats. Because of this, bringing in as many Dragon Vein users as possible speeds up the process of obtaining the desired amount of golds.

If your units are well trained, you can place particularly tanky Dragon Vein users on those points and unequip their weapons to lure as many enemy units within range of the Vein to receive the most amount of gold possible when you activate them. It should be noted that only Percy cannot be removed from the battle field in this manner and must be defeated to complete the map.

The enemy army will not move until the player enters their range or certain turns have passed. All-in-all, this map is relatively simple and is a great source of gold generation in Conquest, though the enemies can be killed for experience if one does not mind using the Ghostly Gold DLC.