[view]
The Great Lord (マスターロード Masutā Rōdo lit. Master Lord in the Japanese versions), is a combat physical class introduced in Fire Emblem: The Binding Blade. The most recurring promotion of the Lord class, the Great Lord class wields the primary weapon of the prior Lord class, usually with a secondary weapon type added (such as Hector gaining the ability to wield Swords or Chrom gaining the ability to use Lances).

In The Blazing Blade, Hector's promoted class is the only one that is called Great Lord (グレートロード Gurēto Rōdo) in both English and Japanese editions.

In The Blazing Blade, the Great Lord class is the promoted form of Hector's version of the Lord class. The class wields Axes as its primary weapon of choice and Swords as its secondary weapon. This version of the class is an Armored Unit with the same terrain capabilities and effective weakness as the other armored classes. Hector's Great Lord class has extremely high attack and defense but low speed and movement. It is effectively a Lord version of General.

In The Sacred Stones, two versions of the Great Lord class appears in the game, acting as the promoted forms of the two Lord characters. Eirika's version wields Swords as its sole weapon of choice and can arm the sacred Sieglinde, while Ephraim's version is locked to Lances and is able to equip the sacred Siegmund.

In Fates, the Great Lord is the base class of the amiibo version of Lucina. The class can be accessed by any female character through use of the DLC-exclusive Exalt's Brand.

In Warriors, the Great Lord returns as a promotion of the Lord class for Chrom and Lucina, as well as the new lords Rowan and Lianna, who can use Staffs in this class.

In Three Houses, the Great Lord returns as a unique class for Dimitri after he receives the Areadbhar and therefore earns the certification. Like in Awakening, the Great Lord class is an infantry class that is proficient in Swords and Lances, as well as Authority.

Great Lords have nigh identical growths to that of Paladins, only differing in slightly lower HP and slightly higher resistance. Their max stats tend to be higher than Paladins, except for Strength, Magic, Defense and Resistance. Unlike Paladins, they max out at A rank Swords and B rank Lances.

The 4 skills they learn are Dual Striker, Charm, Aether and Awakening.

Dual Striker helps allies take down enemies more easily, although it can be traded out for more useful skills down the line. Charm gives allied units within 2 spaces a +2 damage boost, and it can be stacked with other skills such as Inspiration.

Aether is one of the most effective damaging skills in the game, combining healing with huge damage, as the attacker strikes twice with the second strike lowering the target's defense or resistance. While it does have a low trigger rate, this can be patched up with Quixotic or Hoshidan Unity.

Awakening is the final skill Great Lords learn, increasing their hit rate, avoid, critical hit and critical hit avoid by 30% when they fall below 50% HP. This skill makes them extremely dangerous at low health. It combos extremely well with Vantage, as that allows the user to strike first when below 50% HP. It also combos well with Vengeance, as that increases in power the more damage the user has.

Overall, Great Lords are something of a middle ground between Swordmasters and Paladins, and offer a good combination of the former's Speed and the latter's bulk. 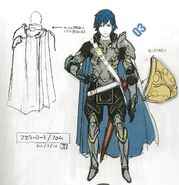 Concept artwork of Chrom as a Great Lord in Awakening. 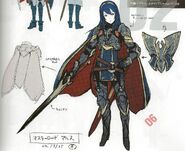 Concept artwork of Lucina as a Great Lord in Awakening.

Concept artwork of Chrom as a Great Lord in Tokyo Mirage Sessions ♯FE.

Artwork of Chrom as a Great Lord from Tokyo Mirage Sessions ♯FE.

Battle animation of Hector. a Great Lord from The Blazing Blade, attacking with an axe.

Battle animation of Eirika, a female Great Lord from The Sacred Stones, performing a critical attack.

Battle animation of Ephraim, a male Great Lord from The Sacred Stones, performing a critical attack.

Battle model of Lucina, a female Great Lord from Awakening.

Battle model of Lucina, a Great Lord from Fates.

Battle model of Lianna, a Great Lord from Warriors.

Battle model of Rowan, a Great Lord from Warriors.

Map sprite of Roy as a Master Lord in The Binding Blade.

Map sprite of Hector as a Great Lord in The Blazing Blade.

Map sprite of Eirika as a Great Lord in The Sacred Stones.

Map sprite of Ephraim as a Great Lord in The Sacred Stones.

Map sprite of Chrom as a Great Lord in Awakening.