Sellsword
Member of the Shepherds

George C. Cole
[view]
“Gregor always do duty for employer. But that not duty. Was bad murder. Gregor could not do. Never.”
—Gregor to Cherche in a Support Conversation

Gregor is a playable character in Fire Emblem Awakening.

Gregor is a mercenary who wanders between nations. It is revealed in his support with Lon'qu that he once competed with Basilio to become the West-Khan of Ferox, but lost against him. Gregor's support with Tharja reveals that "Gregor" was not his birth name, but it was the name of his brother, who was kidnapped and killed by bandits. He blamed himself for his death and took on his brother's name as a tribute to his memory. Tharja then summons Gregor's brother's spirit, who reassures Gregor that his death was not his fault. In his support conversations with Cherche, Gregor explains that, on a past job in Wyvern Valley, he betrayed his companions to save a younger Minerva—Cherche's wyvern—after said companions killed Minerva's mother.

In Plegia, after killing his last employers and trying to save a manakete named Nowi, Gregor is forced to pursue her, as she thinks he's trying to kill her. While Gregor tries to help Nowi, they encounter the Grimleal, who plan to sacrifice Nowi to Grima. As luck would have it, Chrom and his army have arrived in Border Sands, on the way to Plegia Castle to rescue Emmeryn. Though Chrom mistakes Gregor for a common thug, Gregor proves his worth to him and Nowi, helping them fend off the Grimleal and protecting Nowi. After the battle, Gregor finally gets Nowi to calm down. Having nowhere to go and nothing better to do, Gregor proposes that Chrom hire him, to which the prince agrees.

After the war, with the payment he received for his services, Gregor lived a life of excess. However, when he needed money, some say that he worked as a bodyguard to make ends meet. If he is married, he goes back to work due to his spouse's actions.

Gregor has a friendly and refreshing personality, though he has an unusual accent and speech patterns. Despite his mature appearance, he is surprisingly easy to hurt, getting depressed whenever people harp on him about his age. He speaks in third person with a Russian accent in the English version. Gregor's age blesses him with fighting skills that impress even Lon'qu.

Despite his looks and behavior, Gregor is quite wise, knowing how old Nowi actually is and seeing beyond her youthful facade, having knowledge of health and diseases, and giving advice to other members in the army.

Gregor's supports with various characters suggest that a darker and more depressing side to the character lies underneath the carefree and aloof personality. In his support with Cherche, Gregor reveals that his parents were killed by bandits; even though they were hard on him, they were all he had. In addition, he was put through strict training as a child (for instance, he was forced to stay in a tree by his father for three days). In his supports with Tharja, he reveals that he also holds guilt for playing an unintentional part in his older brother's death, as he made a careless mistake during combat that killed him; as such, he took his brother's name (Gregor) as his own. His supports with Maribelle also show that he breaks rules constantly, though he continually tries his best not to under her watch.

Despite being a career mercenary, Gregor demonstrates a moral code, as he saved a baby Minerva from being killed by his clients. Among the army, he is the slowest to feel muscular pain.

Gregor has a Male-only class: Barbarian. If he marries someone who conceives a daughter, then his daughter will inherit the following class instead.

Gregor is a strong, reliable physical unit, complete with high HP, Strength and Skill, subpar Luck, and meager Resistance, while his Speed sits at a respectable level. His strengths are complemented with the Patience skill, which boosts his Hit and Avoid when attacked. The other skill that Gregor learns as a Mercenary, Armsthrift, is less reliable than on a unit like a trained Donnel due to the fact that both his base Luck and his growth rate in this stat is on the low side. Still, the chance to save durability is useful, and Gregor's Luck issues can be partially remedied by giving him a Goddess Icon or giving him more opportunities to level up through generous usage of the Second Seal.

When Gregor promotes to a Hero, his high Skill allows him to effectively harness the Sol skill, often restoring half of the damage he deals to aid his survivability. Further amplifying his usefulness as a Hero is his ability to more easily defeat axe-wielders with the aid of the Axebreaker skill. Training up his Axe rank to at least D will give Gregor a reliable ranged option in the form of the Hand Axe, improving his versatility.

On the other hand, as a Bow Knight, Gregor gains the ability to wield Bows, which will be of somewhat limited use to him, as he's forced to start from an E rank and Bows lack a 1-2 range option, unlike Axes. In this class, he can learn the Rally Skill skill to boost the Skill of adjacent allies. He will also learn the Bowbreaker skill, which will aid him in fending off Bow-wielding units. Should Gregor remain in the Mercenary class line, he will prove to be a strong, balanced sword-user who is proficient in defending himself with solid damage output.

Gregor's alternate class sets are that of the Barbarian and the Myrmidon lines. Gregor is physically more durable than Lon'qu, excelling in HP and Defence but lacking comparatively in Skill and Speed. Even so, Gregor can still reap the benefits of being reclassed into the Myrmidon class line. As a Myrmidon, Vantage is a good skill for Gregor to use in case he is caught in a situation where he is bombarded with attacks. Gregor can also grab Swordfaire as a Swordmaster, a strong skill which can be brought over to his Hero and Bow Knight classes to boost the strength of his sword-based attacks. He will also come to learn the Astra skill, which Gregor can use well as a Hero due to his high Skill growth and eventual cap. As an Assassin, Gregor will be able to learn the Lethality skill, but as its activation rate is very low, it is not highly recommended for him to acquire it. On the other hand, Pass is a decent skill for Gregor to learn, especially if he is a Bow Knight.

As a Barbarian, Gregor's growth rates are a bit lower than Vaike's. In this class, he can learn the Gamble skill in order to obtain a small boost to his critical rate. Despoil is also a decent skill for him to acquire, as Gregor's Luck may be manipulated to increase his odds of finding Bullions with each kill in tandem with Armsthrift. The skills from the Berserker class are superb for Gregor to learn; Wrath works exceedingly well when combined with the Myrmidon's Vantage skill, while Axefaire will boost the strength of Gregor's Axe-based attacks, which is ideal to carry over to the Hero class. If Gregor has a child who is female and can make good use of axes (like Kjelle or Severa), it is thus recommended for him to pass down the Axefaire skill to them, as it is a male-only skill. While the Counter skill that can be acquired from the Warrior class may appear tempting, its usefulness will eventually fade as Gregor's respectable Defense improves. Rally Strength, conversely, is not a bad skill for him to learn, although if one of Gregor's children can acquire Rally Magic, then they will be able to make better use of the Rally skill than he can, owing to their being able to boost both Strength and Magic each time they Rally.

Gregor - Swell Sword
With his more epic battles behind him, Gregor soon sank into a life of excess. When his purse got light, he was said to work as a bodyguard to make ends meet.

Gregor and Robin
Many wrote of Robin's legendary exploits, but accounts of her origins and character varied. Scholars, poets, and bards agreed on one thing alone—she loved her husband, Gregor, above all else.

Gregor and Cherche
After the war, Gregor briefly sank into a life of excess, but at his wife Cherche's request, he found work in Valm. After a successful stint there, offers flooded in from around the world.

Gregor and Cordelia
After the war, Gregor briefly sank into a life of excess, but when he saw Cordelia working diligently as a knight of Ylisse, he decided to clean up his own act and fight by his wife's side.

Gregor and Lissa
After the war, Gregor briefly sank into a life of excess, but when Lissa decided to travel the world incognito, her worldly husband came along to keep the roads safe and the conversation lively.

Gregor and Maribelle
After the war, Gregor briefly sank into a life of excess, but fear of his wife's verbal abuse led him to resume work as a sellsword. Maribelle's family never approved of Gregor, and he never cared.

Gregor and Miriel
After the war, Gregor briefly sank into a life of excess, but when his wife began to treat him like part of the woodwork, he resumed work as a sellsword. Miriel helped out by researching Gregor's targets.

Gregor and Nowi
After the war, Gregor briefly sank into a life of excess, but his wife, Nowi, pestered him into traveling the world with her. Their journey was packed with more chaos than the war that preceded it.

Gregor and Olivia
After the war, Gregor briefly sank into a life of excess, but when he saw his wife dancing in the streets at night to make ends meet, he resumed work as a sellsword. ...Olivia was most grateful.

Gregor and Panne
After the war, Gregor sank into a life of excess. It was his wife, Panne, who broke the cycle and invited him to see her warren, after which the two traveled the land as mercenaries.

Gregor and Sully
After the war, Gregor briefly sank into a life of excess. Sully pestered her husband to take the Ylissean knighthood examination, but he instead continued his mercenary work on the sly.

Gregor and Tharja
After the war, Gregor briefly sank into a life of excess, but fear of his wife's hexes led him to resume work as a sellsword. Tharja secretly tagged along and used her talents to keep him safe.

Gregor is illustrated in the trading card game with the following cards: 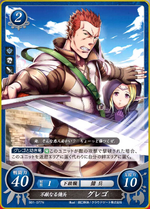 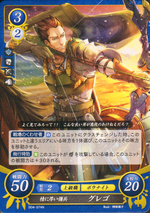 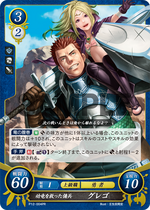 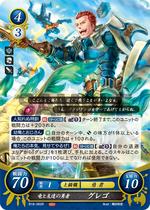 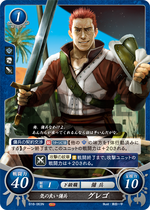 Grego is a name of Greek origin, and its meaning is "watchful". It is also a short form of the name "Gregory". Gregor is the German form.