Faith
[view]
The Gremory (グレモリィ Guremori) class is a class that has been introduced in Fire Emblem: Three Houses. It is a female-exclusive infantry class, who are very proficient at both white and black magic. In order to access the class a character must use a Master Seal at Lv. 30 to take a Certification Exam with A's in both Reason and Faith.

They are akin to the Archsage and the Witch.

This class is named after Gremory (also Gemory, Gamory, Gomory), a demon most notable for appearing in the Ars Goetia book of the Lesser Key of Solomon grimoire, listed as the fifty-sixth. Gremory is a strong Duke of Hell who governs 26 legions of demons. He tells all things past, present, and future, about hidden treasures, and procures the love of women, young and old (but especially maidens). The reason the class is female only is due to Gremory being depicted as appearing in the form of a beautiful woman with the crown of a duchess tied around her waist and riding a camel.

Dorothea as a Gremory in Three Houses.

Gremory and her Dark Bishop Battalion. 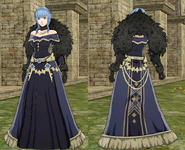