Leader of The Grieth Pirates

Dread Fighter
[view]
“While you royals were lounging about ignoring your own kingdom, I was becoming a VERY RICH MAN! You people turned Zofia into a place where only the strong survive. Hell, now it's the spitting image of Rigel itself, doncha think?”
—Grieth

Grieth is the leader of the Grieth Pirates in Fire Emblem Gaiden, who kidnapped the Pegasus Knight Est. Sonya and Deen work for him, but both secretly despise him. His group of pirates and his fort are located in the eastern desert of Valentia.

Grieth has been alluded to several times throughout the story by other characters, and he makes his first physical appearance in Chapter 3: War of Deliverance through dialogue during Celica's route. He is informed of Wolff's defeat at the hands of Celica's party and orders Deen and Sonya to guard the north and south deserts respectively, plotting to deliver Celica to Rigel while apparently ending his alliance with Desaix in the process. After either of the two are dispatched and the remaining faction refuses to chase Celica's party down, the angered pirate decides to confront Celica himself with what few loyal soldiers of his remains. Despite his best efforts and the efforts of his men he is slain by Celica's party, freeing Est from his captivity, ending Deen's/Sonya's service to him, and ultimately bringing an end to his reign as the Zofian "brigand king".

Grieth is an opportunistic individual who will seize at whatever power is available to him, showcased by his ease with betraying Desaix by his attempts to deliver Celica to Rigel. Prior, he wasted no time ascending to become the "brigand king" as Zofia's royalty (likely the ruling king Lima IV) did nothing to stop him. He is also shown to be fearless and defiant though impatient, easily upset, and prone to shouting. He demonstrates these traits by impatiently ordering a brigand under him to spit out the bad news and nearly threatened said subordinate to spill the identity of Wolff's killer. After Deen/Sonya betrays him after the other's deaths he furiously charges at Celica's group himself. Curiously, he does not belittle the strength of his men upon their defeat among other things; at Wolff's demise he immediately assumed that said sniper and his men were taken down by the considerably powerful Deliverance who had recently freed Zofia Castle from Desaix's control, and upon hearing otherwise (that it was a "ragtag group of kid mages and a mercenary" at that) he demanded info on the group in disbelief that children were somehow powerful enough to kill Wolff's entire group. He is also not so overconfident in his own victory despite his considerable power, aware of the fact that all of his power could vanish. Ultimately, he is still a defiant individual as he swore to drag Celica and her group down with him after realizing that perhaps he's in over his head, and even in death he does not lose this edge, claiming that another person like him would always be around as he dies.

Description: The Self-proclaimed "King of all Brigands" in Zofia.

Concept artwork of Grieth from Echoes: Shadows of Valentia. 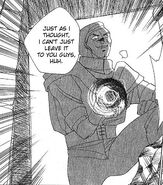 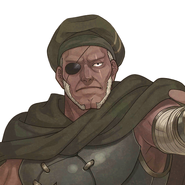 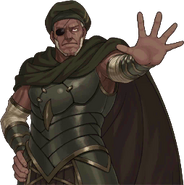 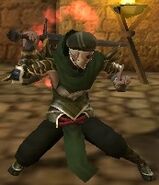