The Griffon Rider is a Griffon-mounted combat physical class that is exclusive to Fire Emblem Awakening.

Griffon knights are the alternative promoted form of the Wyvern Rider class, opposite Wyvern Lord, and replacing Wyvern Knight from Fire Emblem: The Sacred Stones. the Griffon Rider class wields Axes as it sole weapon of choice. Griffon Riders are treated as both Aerial and Beast units, and are thus vulnerable to a combination of Bows, Wind Tomes and beast-slaying weapons.

The Griffon Rider is a class that is known for its remarkably average stats across the board as well as its extreme mobility,which is bested only by that of units armed with Galeforce.

Griffon Riders possess more balanced stats than those of the Wyvern Lord or the promoted Pegasus Knight classes. Compared to the Wyvern Lord, Griffon Riders have better Speed and Skill, but lower Strength and Defense. While they're fairly well balanced, other fliers may do better depending on the situation. As a compromise between these two extremes, they can be considered the aerial equivalent of Heroes. They are, however, marred by their poor resistance, which is carried over from their previous class, even with the use of Iote's Shield. Furthermore, they are limited to wielding Axes, resulting in a lack of various weaponry, especially if facing a unit with Axebreaker.

Deliverer increases the user's Movement by 2 when he/she is in a Pair Up. This pushes their movement to 10, or 11 with specific units. With use of Rally Heart, Rally Movement and the stat bonuses of Movement +1, a maximum move of 14 can be achieved, and when used with Galeforce, one can cover an extremely large area. The very high movement can also be used to bring units like Generals, who have very poor movement and struggle to reach the front line.

Lancebreaker gives the user a bonus of 50 points to both their Hit Rate and Avoid against Lance wielders permanently, making them excellent against those with high Skill in particular. This allows them to emerge victorious more frequently when facing against any lance user in battle. Notably, it makes them close to a hard-counter to Falcon Knights (who barely lack the speed to double Griffon Riders) and allows them to overcome their weakness to the Beast Killer.

Concept artwork of the female variant of the Griffon Rider class. 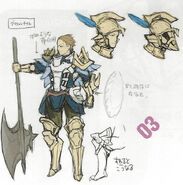 Concept artwork of the male variant of the Griffon Rider class.