--
[view]
Grima's Truth (魔書ギムレー, Masho Gimurē lit. Demon Book Gimlé) is a Dark magic tome from Fire Emblem Awakening. The personal tome of Validar in Awakening and Male Morgan in Heroes, Grima's Truth is said to be capable of channelling the powers of the Fell Dragon for whom it is named. The symbol on the cover of the tome is the Mark of Grima. 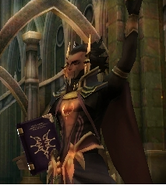 Validar with Grima's Truth in Awakening.