Dragonskin, Rightful God
[view]
“The Fell Dragon who seeks to usher in a dark future.”
—In-game description in Awakening

Grima (ギムレー Gimurē lit. Gimle) is an enemy-only class that is exclusive to Fire Emblem Awakening. The personal class of the character of the same name. The class is a combination of the Grima from the future, having possessed Robin, and the dragon Grima of the present. Only the former is actually targetable in the game's mechanics, with the Grima of the present simply being part of the background and map. Grima attacks by the Vessel Grima directing the Dragon Grima's head to either hurling orbs of fell energy at foes or impaling them with spikes.

Grima's battle model as the Fell Dragon in Echoes: Shadows of Valentia. 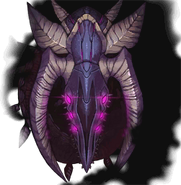