Wyvern Lord
[view]
“Heh heh...ha ha ha... Gather as many fools as you like ...your weakness cannot survive... No one on this earth can withstand the might...of our king... Ggghhhaaaa...”
— Gromell's death quote

Gromell (グローメル, Guromeru) is a boss character in Fire Emblem: Path of Radiance. He leads a group of soldiers to use rockslides to kill Ike's forces before they enter Crimea. However, his attempt fails, and he is killed in the process.

Gromell is an extremely unorthodox opponent. In Path of Radiance, the Bolt Axe will always deal magical damage. This would make it an abysmal choice of weapon were it not for his shockingly high Magic stat, which is a full 12 points higher than the norm for his Level and Class. This makes him very dangerous to physical units, but nearly harmless to high end mages. To make matters worse for Gromell, his Resistance stat is notably worse than his Defense stat, making his match up against Magic units even worse. Though his default battle conversation seems to suggest otherwise, Gromell will attack any unit that ventures into his range. Exploiting this, players can bring a group of high Resistance units (preferably Archers and Wind-wielding mages) to bait Gromell into attacking, then finish him off during the following Player Phase. Alternatively, should a strong flying unit such as Jill reduce his HP enough without killing him and should Gromell misjudge his subsequent Canto, it is possible for his subordinates to inadvertently kill him with a boulder, though this is only recommended for comical demonstration in a Let's Play since it relies on luck and robs the player of experience points for that unit and Gromell's Bolt Axe.

Amusingly, Gromell possesses Resolve. While it will improve his Speed stat by a significant margin, its boost to Strength will do nothing for him, as his weapon is magical. It does bear mentioning, however, that Resolve can cancel out a double-attack if the unit facing Gromell is incapable of doubling him after the boost to Speed, so players should take care to either avoid relying on double attacks to kill him or avoid sending him below 50% until they are ready to land the killing blow.

In Hard Mode (and the Japanese exclusive Maniac Mode) Gromell's Speed has seen a massive improvement, and he will easily double most units once his Resolve skill is activated. While he may not do well against mages, once baited he will often be in range of at least one unit with poor Resistance. Players should do everything in their power to obliterate him before he gets a second chance to move and attack.

Gromell: Grr! So you've made it this far, have you? Then prepare to be sent down screaming!

Gromell: You knew we were here, but still you charged our positions? I'll teach you to regret your impudence!
Ike: Sorry, but at this point, I don't think you're in position to teach me anything.

Gromell: A Begnion pegasus knight, eh? I'll prove that Daein's aerial prowess is more than equal to yours!

Gromell: Hmph! So you're Shiharam's daughter? You may ride a wyvern like your father, but you know nothing of a true knight's faithfulness!

Gromell: You're one of Shiharam's men! You betrayed your country twice, you cowardly dog! Now die like one!

“Heh heh...ha ha ha.... Gather as many fools as you like... your weakness cannot survive... No one can withstand the might...of our king... Ggghhhaaaa...”
—Death Quote

Gromell is illustrated in the trading card game Fire Emblem Cipher with the following cards: 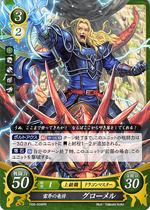 Sketch of Gromell by Daisuke Izuka.

Gromell as a Wyvern Lord in Fire Emblem 0 (Cipher).