Princess of Bern
Queen of Bern

Chapter 2: The Princess of Bern (The Binding Blade)

Erika Harlacher
[view]
“I want to find a peaceful way to end this war... I figured that if I could speak with someone from Lycia, I would find a solution.”
—Guinivere to Roy in The Binding Blade.

Guinivere is only playable on the trial maps of Fire Emblem: The Binding Blade once the player has completed the game nine times, and one of them in hard mode.

Guinevere was the daughter of King Desmond and his mistress, making her the half sister to Zephiel, the child from Desmond's wife, Queen Hellene. As a result of Guinevere's mother being the woman Desmond had originally intended to marry and Zephiel's mother being the woman he had been forced to marry, Desmond blatantly favored Guinevere over Zephiel, desiring Guinevere's husband to take the throne of Bern.

On one occasion when Zephiel visited his father and Guinevere under the pretense that the latter was sick (a lie from Desmond), a healthy Guinevere was gifted a fox cub by her brother. Despite Zephiel's attempt to connect to his father, Desmond was enraged to see the two siblings and thought Zephiel was trying to steal Guinevere from him.

As her brother grew, so did his popularity among Bern, Desmond came to feel Guinevere's chances of ascending to be Bern's ruler were being threatened. This led to Desmond setting a trap for Zephiel, pretending to accept his son, Desmond offered him a cup of poisoned wine. Faking his death and funeral, Zephiel killed his father. While Guinevere's young age meant she didn't comprehend the full situation, she noticed her brother was never the same afterwards.

When Zephiel began his war of aggression, Guinivere took the Fire Emblem, a royal heirloom, and fled Bern, hoping to put a stop to him, by seeking for an alliance with other countries to prevent the upcoming war. Unlike her older brother, she does not want a war to happen, even though she still remembers how well they got along as children. Together with her lady-in-waiting, the cleric Elen, Princess Guinivere run away from the castle, but they are captured by Rude while on their way to Lycia, who wants to deliver them to the enemy.

Elen escapes from their captor and eventually her lady-in-waiting encounters Roy, the leader of the Lycian League. Elen pleads for their help to free Guinevere. She is succesfully rescued by them, and in face of her brother's actions, Guinevere asks for Roy's help, explaining that she saw that Zephiel had gone too far. She entrusts the Fire Emblem to him, believing that he would be the one to stop the war that her brother started, and joins Roy's army for the rest of the story in an effort to stop Zephiel.

Eventually, she becomes the queen of Bern after Zephiel's defeat, despite the protests of some aristocrats.

Guinivere is a gentle noble lady, that is opposed to war and unnecessary violence. She is very graceful and grew into a woman whose beauty is celebrated as the fairest of the kingdom. She is kind, with a keen mind and stands up for what she believes to be correct, regardless of the adversities.

Guinivere genuinely longed for her older brother Zephiel. Despite being born from different mothers, they had a very close and warm relationship. Despite that, she had no choice other than opposing him when she realised that his personality changed completly and that he had became a corrupted king. Even in opposites sides, she never stopped caring for her brother, but was aware that she needed to take some difficult decisions for the greater good.

Guinivere's HP is very low for a Level 20 unit of any kind, but this flaw can be forgiven by her very high Defense and Resistance, as well as the ability to use Light magic, something other Sages cannot do in this game. When facing Berserkers with Devil Axes, she can take one hit, as long as it is not a critical. If there are any Angelic Robes left that can make her HP higher, the best way to go about it is to enter the secret shop in Chapter 21 and buy some from there and save them.

Princess of Bern
Princess of Bern, and sister of the king, Zephiel. Her beauty, kindness, and intelligence make her popular among her people. Appears in Fire Emblem: The Binding Blade.

Guinivere easily fits the mold of a typical offensive Blue Mage Infantry unit, having excellent Atk and Spd, sitting at a strong 35/40 neutral value for both and a solid 38 neutral Res. While her HP lies at a decent 36 neutral, giving her a modest magic bulk, her abysmal 16 Def, 12 if it is her flaw stat, means that any physical unit can easily destroy her in a single blow. Just on base stats alone, his makes her potent offense unit and her ability to duel mages goes without question, especially when taken into consideration in tandem with her personal tome.
Guinivere wields the legendary Aureola tome which not only boosts her Res by 3, but it also deals effective damage against tome units. Her effective damage is only shared by Halloween Sakura's Kitty Paddle, but Aureola has other perks in addition. If she either initiates combat or is within two spaces of an ally, she gains Atk/Spd/Res +5 and negates any foe with a weapon that deals adaptive damage, mainly targeting Dragons to hit her much higher Res, and also gives her self regeneration, healing 7 HP to herself and allies within two spaces of her. The sheer volume of effects not only provides her with solid combat boosting, but the supportive effect gives Guinivere one of the most loaded, unrefined tomes introduced. Her tome is so powerful, even Fallen Lyon can fall to her under the right circumstances, making her a particularly useful unit on your team, and a dangerous unit to face as an enemy.
Iceberg pairs naturally with her high Res for truly explosive attacks when it activates. She has access to tier 4 Attack Resistance Push, giving her a further Atk/Res +7 in-combat boost so long as her HP is above 25% at the start of combat. While she takes 5 damage afterwards, her tome can easily erase this recoil. Lull Attack Resistance inflicts Atk/Res -3 on her foe during combat while neutralizing any bonuses they have. Joint Drive Resistance grants an additional +4 Res to her allies during combat if she is within two spaces of them and she also gains +4 Res during combat if an ally is within two spaces of herself.

With her pitiful physical bulk, attacking her with a physical oriented unit is the way to deal with her most effectively. It is best to deal with her during the player's turn as allowing her to start combat is a far easier activation requirement for her tome than it is to take her out of the range activation requirement. Legendary Celica is possibly the only tome unit in the game who can possibly defeat her in a straight fight and only if Celica is the one who initiates combat. Dragons are ill advised as she prevents their common adaptive damage effect.

Guinivere has a complete kit that only requires a support skill which either Reposition or Draw Back blend perfectly for this. Her Skill C can be exchanged Wave Skill for self and ally buffing during certain enemy turns. Ploy skills also work wonders on her due to her naturally high Res value. She can make all of them work, but Attack Ploy is good for further dampering mages from damaging her, Speed Ploy allows her a greater number of foes to double attack or avoid getting doubled, and Resistance Ploy increases her damage output prior to combat so she can further increase her damage output through her other skills and her tome.

Guinivere is illustrated in the trading card game Fire Emblem Cipher with the following cards: 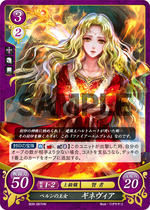 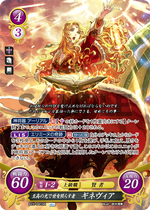 Guinevere was the name of the Queen of Camelot; the wife to King Arthur who was torn between her love for him and Lancelot.